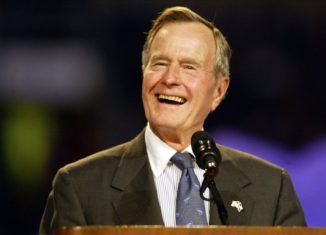 George Herbert Walker Bush, a World War II veteran who served as the 41st President of the United States, died on Friday, November 30, 2018, at the age of 94. Bush leaves behind a life of public service that spanned over six decades.

The son of Prescott Bush and Dorothy Walker, George Herbert Walker Bush was born on June 12, 1924, in Milton, Massachusetts, a wealthy suburb of Boston. Soon after, he and his family moved to Greenwich, Connecticut. He planned to attend Yale University, but following the Japanese attack on Pearl Harbor and the United States’ entrance into World War II, Bush decided to enlist in the United States Navy on his 18th birthday. He trained and became one of the youngest aviators in the Navy. He even faced death once before. While a twenty-year-old pilot during the war, George Bush was one of eight other Americans to be shot down on September 2, 1944, above the Japanese island of Chichijima. Stranded on a liferaft, Bush was finally rescued by an American submarine hours later. He later learned that the other men were captured and cannibalized by the senior Japanese military officials. Following the end of World War II, Bush enrolled at Yale, where he was a captain of the baseball team. He graduated in 1948 and moved to West Texas with his wife, Barbara, in order to begin his career in the oil business. Although he was from an affluent family, George Bush became a self-made millionaire by the time he was forty years old.

President Bush’s most important role in life, as he once described, was as a father, a grandfather, and a husband. Barbara Pierce Bush, the wife of George H.W. Bush for 73 years, passed away on April 17, 2018. The two met at a Christmas dance in Greenwich just weeks after the bombing of Pearl Harbor in December 1941; Barbara Pierce was only sixteen years old and George Bush was seventeen. They were married on January 6, 1945. They had six children: George Walker, Robin, Jeb, Neil, Marvin, and Doro. Robin, their first daughter and second child, was born in 1949, but passed away from leukemia at three years old. George Bush, commonly referred to as Bush 41, was the father to George W. Bush, the 43rd President of the United States from 2001 through 2009. They are only the second father and son to be presidents of the United States, the others being John Adams, the 2nd president, and John Quincy Adams, the 6th president. Jeb Bush, the former governor of Florida, sought the Republican nomination for president in 2016. George and Barbara Bush had the longest marriage between a president and a first lady in American history. In addition to their six children, they also had seventeen grandchildren and eight great-grandchildren.

Prescott Bush, the father of George Bush, was elected to the United States Senate in 1952 from the state of Connecticut. A lifelong Republican, George Bush followed in his father’s footsteps and entered the political arena, becoming the chairman of the Harris County Republican Party in Texas in 1963. His first run for public office came in 1964 in the Texas Senatorial Race, which he lost to incumbent Democrat Ralph Yarborough. Two years later, Bush was elected to Congress as a Representative for Texas’s 7th District, and he was re-elected to that seat in 1968. In 1970, Bush ran for the Senate again, falling short to Democrat Lloyd Bentsen. Following two terms as a Congressman, Bush was nominated by Republican President Richard Nixon to serve as the United States Ambassador to the United Nations, and he was confirmed unanimously by the Senate in 1971. After nearly two years at the UN, Bush was chosen by Nixon to serve as the Chairman of the Republican National Committee. One of the most challenging moments of George Bush’s maturing political career was during the Watergate Scandal in 1974. Although Bush was grateful to Richard Nixon for appointing him to two exceptional positions, Bush called for Nixon’s resignation for the good of the Republican Party. Nixon officially resigned on August 9, 1974.

Nixon’s successor, President Gerald Ford, appointed George Bush in September 1974 to serve as the Chief of the United States Liaison Office in China. The United States and the communist People’s Republic of China had no official diplomatic relations, which meant that Bush did not hold the official title of being an ambassador. He served on the job for fourteen months until President Ford nominated him to be his Director of the Central Intelligence Agency (CIA) in 1976, a position Bush held for about one year until Ford left office. After initially leaving Washington, Bush was one of the most well-regarded names in the Republican Party, as well as arguably the most qualified person in all of politics to hold any future position of power.

He served as the 41st Vice President of the United States from 1981 to 1989 under his former political rival and conservative icon, President Ronald Reagan. Bush first ran for president in 1980, failing to win the nomination over the former actor and former Governor of California. Their race was at times very contested, but it was never personal. Following his loss in the 1980 Republican Presidential Primaries, George Bush’s political career was all but over. The two men respected each other, however, and Reagan unexpectedly selected Bush to be his running mate in the 1980 Election against the incumbent and struggling President Jimmy Carter and Vice President Walter Mondale. The Reagan-Bush ticket, highlighted by its slogan “Let’s Make America Great Again,” won 44 states and 489 votes in the electoral college. Four years later, the two won re-election against the Democratic ticket of former Vice President Walter Mondale and his running mate, New York Congresswoman Geraldine Ferraro. Reagan and Bush won 49 states and 525 votes in the electoral college, only losing Mondale’s home state of Minnesota. The highlight of Bush’s vice presidency came within just two months after his inauguration, when President Reagan was shot and nearly killed in March 1981. While rushing back from Texas to Washington, Vice President Bush was told that he would be landing in a helicopter directly at the White House, where he would be informed of all emergency situations in case Reagan’s injury was fatal. Bush, however, out of respect for the Reagans and precedent, calmly but firmly refused, saying “only the president lands on the South Lawn.”

After eight years as Reagan’s vice president, Bush once again ran for president. He won his party’s nomination in 1988 and chose Indiana Senator Dan Quayle to be his vice presidential candidate. The Democrats nominated Massachusetts Governor Michael Dukakis, and as his running mate, Texas Senator Lloyd Bentsen, the same man that defeated Bush in 1970 for his Senate seat. Bush and Quayle, however, due in large part to the popularity of the Reagan presidency, won the 1988 Presidential Election, carrying 40 states and winning 426 votes in the electoral college. George Bush became the first sitting Vice President to be elected as President since Martin Van Buren in 1836.

As the 41st President from 1989 until 1993, George Bush is remembered by history as our nation’s most successful one-term president. Under his four years as leader of the free world, the global balance of power shifted dramatically. The Berlin Wall fell during his first year in office, commencing the complicated reunification process between West Germany and East Germany. The fall of the Berlin Wall also marked the beginning of the end of the Cold War. The Gulf War, which lasted from August 1990 until February 1991, proved to be President George Bush’s most remarkable moment as commander-in-chief.

On August 2, 1990, Iraqi forces led by Saddam Hussein invaded the small, oil-rich nation of Kuwait. When Iraq refused to withdraw its troops from Kuwait, the United States led a coalition of other nations and responded with Operation Desert Shield, an immediate defense of Saudi Arabia from an Iraqi invasion, and Operation Desert Storm, which was the use of military force against Iraq. Operation Desert Storm lasted for nearly six weeks and ended on February 28, 1991, when Kuwait was officially liberated and Iraq surrendered. The swift and strong response from President Bush and the United States during the Gulf War boosted his domestic and foreign popularity, as his approval rating was as high as 89% at the end of the short war.

The Cold War, which defined geopolitics ever since the end of the Second World War, finally came to an end under the presidency of George H.W. Bush. The Soviet Union, after years of inner economic and political struggles and protests, began to break up into independent states that existed prior to the formation of the Communist empire. On December 25, 1991, Soviet President Mikhail Gorbachev resigned from his post and gave control of the vast nuclear arsenal to new Russian President Boris Yeltsin. Although George Bush did not cause the Soviet’s fall, he is praised for his restraint and refusal to comment on their apparent and inevitable collapse to Gorbachev, hoping to not provoke the demising leader. Due to the strength and leadership of President George H.W. Bush, the Cold War ended and the New World Order commenced without the direct firing of a single shot between the two superpowers.

The Bush Administration also left a large impact domestically on America. During his brief presidency, George Bush nominated two Supreme Court Justices, David Souter in 1990 and Clarence Thomas in 1991. Although Justice Souter was nominated by a Republican president, he predominantly voted with the liberal justices on the Supreme Court until his retirement in 2009. Clarence Thomas, however, the second African-American Supreme Court Justice in history, remains the most conservative member of the court today. Under Bush, the economy began to stagnate and the United States entered a recession in the early 1990s. During his 1988 campaign, Bush repeatedly promised to not raise taxes, including his now infamous statement at the 1988 Republican Convention, “read my lips: no new taxes.” However, in 1990, due to the country’s growing national debt, he agreed and signed into law new tax hikes, damaging his political image and popularity. This broken promise led to the end of George Bush’s remarkable political career.

He lost re-election in 1992 in a three-way race against independent billionaire Ross Perot and Democratic Arkansas Governor Bill Clinton. Perot won nearly 19% of the vote, which severely hurt Bush and his base. While leaving office on January 20, 1993, George Bush left a letter for his successor, newly-elected President Bill Clinton, which is now used as a symbol of bipartisanship and respect between former presidents. In it, Bush famously wrote “your success now is our country’s success. I am rooting hard for you.”

George H.W. Bush, at the age of 94 years and 171 days, was the oldest ever living former president. He was also the last president to be elected from the Greatest Generation, who lived during the troubles of the Great Depression and the horrors of World War II. His state funeral took place over four days, including a service in Washington, D.C., and his burial took place on December 6 at the George Bush Presidential Library in College Station, Texas. All living former presidents and vice presidents were in attendance at his funeral in Washington, as well as President Donald Trump and Vice President Mike Pence. His eldest son, former President George W. Bush, delivered the eulogy, crying at the end while saying “through our tears, let us know the blessings of knowing and loving you, a great and noble man, the best father a son or daughter could have. And in our grief, let us smile knowing that Dad is hugging Robin and holding Mom’s hand again.”

George Herbert Walker Bush leaves behind an extraordinary life of achievement and service to our country. His remarkable decades-long record of public service completely redefined what being a true statesman is. From his time as an aviator in one of the deadliest wars in history to his respect and defense of the office of President of the United States, we are forever in his debt for his love and dedication to the United States of America and the entire world.

His final words were over the phone to his son, George W. Bush, saying “I love you, too.”