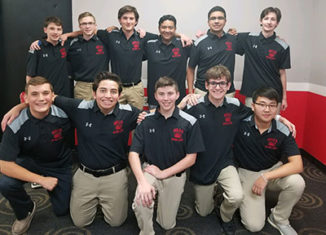 Bowling is a sport that can be played by people of all ages. The goal of the game is to knock down as many pins as possible with each toss of the bowling ball (10 pins). The maximum score you can get is 300 points. In order to do this, you would have to knock over all of the pins 12 times! Bowling is currently played by 100 million people in over 90 countries. The Half Hollow Hills school district has joined in on the fun and added bowling as a school sport for this school year. I interviewed the head coach of the Bowling team, Mr. Campanelli, to learn more about this newest school sport.

Hunter De Siver (HD): Why did the district just now come up with the idea of adding a bowling team?

Mr. Campanelli (CAMP): Last year, High School West had intramurals for bowling. A lot of kids showed interest and brought it to the attention of the athletic office.

HD: Is there a JV team and a varsity team?

CAMP: You’ll have a matching pair, so that’s technically your varsity team, but at the same time there is a practice lane going on. It’s not called the JV lane on paper, but it’s where they’re able to practice their abilities to make substitutions as time goes on. At certain points during games, there are rules that allow me to sub individuals in and out.

HD: How many players are on a team?

CAMP: We currently have twelve on the boys’ roster, for example, but when you’re playing in a match, it’s five vs five.

HD: How often are matches and practices?

HD: How many teams are there in the entire league?

CAMP: Our league has seven teams, but in terms of the county, there are four leagues in Suffolk County alone, so there are 28 teams in total.

HD: Is it walk-on or do you have to try out?

CAMP: The goal was for there to be a tryout process. This year, we only had 14 interested individuals that came out for the team, and we ended up down to 12 due to varying reasons.

HD: What does the average score need to be in order to make the team if it were a tryout?

CAMP: If it was a tryout, we were going to base it solely on pure numbers, and we kind of knew that twelve was a good roster count. If we ever have to run a tryout, the way it would work is that it would be held over a couple of days with three games a day, and all of those scores would be added up to average out. We would take the top 12 averages. It’s kind of like track: you’re going take the fastest times on your team.

HD: How many matches are there in the entire season?

CAMP: We have 14 matches. Just matches alone. So, it’s 14 times the 3 games within a match, which is 42 match games a year. With practice, we play 3 games at practice each day which adds up also.

HD: Are their playoffs and a championship?

CAMP: Yes. There are actually two different types: individual county playoffs and team county competitions. For an individual, you have to be in the top six in the county in order to make the team that represents New York State. Whoever the top six averages in Suffolk County are, they represent Suffolk County up at the New York State Finals in early February. In the team competition, if you place top three in your league, you are automatically in for the Suffolk County Championship. There is also a Wild Card qualifier. So, when our season is over, we’ll actually have another opportunity to bowl. It’s four games, it’s the best 5-man team, and the best score team score from that tournament will move on to be part of the Suffolk County Team Finals.

Bowling can be a lot of fun and is a very welcome addition to HSE Athletics. We wish all of our bowlers the best of luck as they work towards the championship and bringing home a title for the Half Hollow Hills community. As always, go T-Birds!