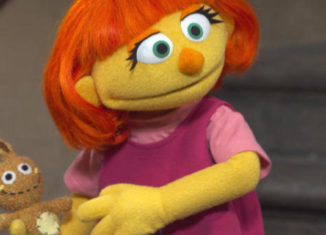 For the first time in nearly ten years, the educational and entertaining children’s program Sesame Street is introducing a new Muppet. Although this new addition is newsworthy in itself, it is not the only reason why newcomer Julia, a four-year-old girl with bright red hair and green eyes, is so special. Julia is the first Muppet to be diagnosed with autism.

Julia was introduced to the program as a part of Sesame Workshop’s initiative, “Sesame Street and Autism: See amazing in all children,” which first blossomed in 2015. The vibrant girl was introduced with the purpose of exposing young children to characteristics of autism, and advocating universal acceptance of those who are affected by the condition. Julia tends to echo what is said by others, is sensitive to noise, and is easily distracted. However, she does not let autism define her. Rather, Julia loves to paint, pick flowers, and sing along with the rest of the Muppets crew.

In Julia’s debut episode, viewers are able to see common behaviors and situations experienced by people with autism. When Big Bird tries to speak to Julia, she initially ignores him. Through this scenario, Big Bird learns that Julia does not dislike him or want to hurt his feelings, but rather has a different way of communicating with others. Also, when the other Muppets propose that the group play tag, Julia jumps with joy. This then prompts the crew to join Julia in her excitement and turn it into a new activity. These simple scenes will demonstrate to child viewers the differences between Julia and the other Muppets, and hopefully leave them with a stronger awareness of the behavioral differences that accompany their autistic peers.

Not only will Julia promote acceptance of autism to children who are not personally affected by it, but she will also be utilized as a resource for parents with autistic children to help teach them about their special condition and what it entails. According to DOGO news, an executive Vice President of Sesame Workshop received an especially enlightening response from one mother who taught her autistic daughter about her own differences through the new Muppet character. After the daughter saw how amazing Julia was, she exclaimed, “So I’m amazing too, right?”

The inclusion of Julia into the cast will be revolutionary for combatting the stigmatization of autism. By introducing Julia to children at such a young age, they will become educated early on and will, therefore, be more understanding of the implications of this condition. Unfortunately, more than 63 percent of autistic children face some type of bullying. Hopefully Julia will be able to show kids that everyone should be appreciated for their own special qualities, and all individuals should be treated equally.