You are here
Home > Entertainment > Bebe Rexha: Next International Superstar 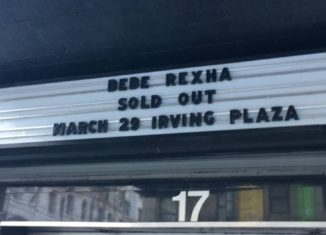 The Monster By Eminem featuring Rihanna. Hey Mama by David Guetta. Me Myself and I by G- Eazy. What do all of these international smash hits have in common? They were all co-written by Bebe Rexha. On some songs, such as “Hey Mama” and the recently five time platinum certified song, “Me Myself and I,” Bebe is even featured. After years of songwriting for other well-known artists and even being a part of a musical duo entitled “Black Cards” with Pete Wentz, it was finally Bebe’s turn to take a step into the spotlight. In 2013, Bebe was signed to Warner Bros. Records. Bebe then released her first EP, I Don’t Wanna Grow Up, on May 12, 2015. This taste of what’s to come from Bebe left her fans dying for more music. Before releasing her next full project, she released her single “No Broken Hearts,” featuring Nicki Minaj. The music video amassed over 180 million views on YouTube. On October 28, Bebe released the lead single off of All Your Fault Pt. 1 called “I Got You.” This single marked Bebe’s first Billboard Hot 100 entry as a solo artist. All Your Fault Pt. 1 was released on February 17, 2017 and consists of six songs. Soon after the EP dropped, Bebe announced her All Your Fault Tour which took place throughout the entire month of March; she is embarking on the European leg of the tour in May. I was lucky enough to attend the New York City show on the All Your Fault Tour.

On Wednesday, March 29, 2017, Bebe Rexha performed a hometown show to a sold out crowd of 1,025 people at New York City’s Irving Plaza. Bebe’s number one priority for her shows is to make sure it is a safe haven for those who don’t feel accepted anywhere else. She wants to ensure that everyone feels as if they belong. Luckily, I had VIP meet and greet at the show, so I was able to hear Bebe’s soundcheck as well as meet her! Bebe sounded great in her soundcheck as she sang a few songs as well as interacted with the crowd. Bebe is an extremely amiable person and is very down to earth. You can see how much love she has for her fans and how much her fans mean to her. This showed when I met her as she was so friendly and welcoming. We took a picture, we had a quick conversation, and she made sure to thank me for coming to the show. After having that VIP experience, I was pumped to see the actual concert come to fruition. Opening acts Spencer Ludwig and Daniel Skye, did a fantastic job of getting the crowd riled up and excited to see Bebe perform. At around 9:40, Bebe started her set and had many surprises up her sleeve. As this was her hometown show and all of her family and friends were in attendance, she stuck to the motto “Go Big or Go Home” and made a spectacle of the show. She had many surprise guests that came to perform, such as Dej Loaf and even R&B superstar, Ashanti. Together, they sang many of Ashanti’s classic songs on stage. Of course, the crowd loved Bebe’s original music as well. The crowd effortlessly sang along to fan-favorite tracks such as “F.F.F.(Forget Fake Friends),” a relatable anthem to anyone who ever felt backstabbed by their so-called friends, as well as “Small Doses,” “I’m Gonna Show You Crazy,” and “Atmosphere.” She also performed some of her hit collaborations from over the years, such as “Take Me Home,” “Me Myself and I,” “Hey Mama,” and “In The Name Of Love.” 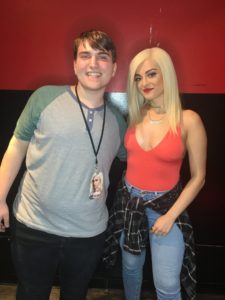 Bebe’s unapologetic, New Yorker attitude was displayed during the show. At a moment where she noticed the audience on the balcony just standing still, not dancing, or singing along in the slightest way, she decided to call them out. Bebe talked about how she has worked a decade in the industry and does not want people like that to ruin the energy and vibe of her show. Thinking that they could be executives from her record label, she says that they should be ashamed of themselves since they should know all of the words to her songs. The crowd screamed and applauded  as Bebe said this as we all appreciate her hustle-and-bustle to make it in the music industry and her obvious love for her fans. She praised and showed all of the other fans at the show, calling them real Bebe Rexha fans (Rexhars) and how she keeps it real as a New Yorker. The concert ended on a high note. For her song, “No Broken Hearts,” Bebe had two girls from the crowd come up on stage to rap the Nicki Minaj verse. At first it was a rap battle, but both girls killed the verse, so they both won an autographed Bebe Rexha T-shirt!

Bebe’s last song of the night was her current single, “I Got You.” During the song, she wore an Albanian flag to showcase her heritage. After the song ended and Bebe declared her love for her fans and New York one last time, the concert was over. Bebe Rexha’s All Your Fault Tour was truly a show that should not have been missed. Bebe’s passion for music and love for her fans radiated off of her. Bebe’s next EP All Your Fault Pt. 2 is scheduled to be released in April. I can’t wait for Pt. 2 to come out, and I’ll be in the front row for Bebe’s tours in the future!