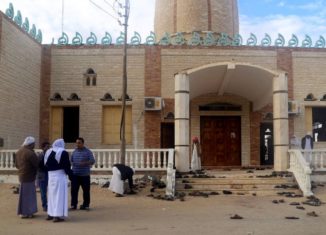 On Friday, November 24th, terrorists attacked the al Rawdah mosque in the Northern Sinai Peninsula of Egypt. At least 305 worshippers were killed and at least 125 others were left injured. The terrorists first used improvised explosives that severely damaged the mosque. Then, the gunmen used automatic rifles to shoot the civilians and even fired at ambulances.

There is much speculation that this is an act of the terrorist organization ISIS as the Egyptian government has been having conflicts with ISIS in the Sinai Peninsula for years. The mosque belonged to the Sufi branch of Islam. This specific mosque was a historical place of worship, renowned as the birthplace of important Sufi cleric Sheikh Eid al-Jariri. Many ultra-orthodox Muslims are disparaging of Sufism as it is a smaller, more mystical sect of Islam. This tension could have fueled ISIS’s disdain for Sufism, leaving the Sufi worshippers as victims.

President Abdel Fattah el-Sisi vowed to respond to the attack on al Rawdah mosque with “brute force.” Many world leaders have expressed their solidarity with the Egyptian government, calling for support of the victims and a taking of arms against terrorism in the Middle East. US President Donald Trump tweeted, “Horrible and cowardly terrorist attack on innocent and defenseless worshipers in Egypt. The world cannot tolerate terrorism, we must defeat them militarily and discredit the extremist ideology that forms the basis of their existence!” The Egyptian government declared three days of national mourning following the attack as some are calling this the deadliest terror attack in the country’s history. The Egyptian military is currently hunting for the killers responsible for this tragedy.