You are here
Home > World News > Tragedy in Lebanon 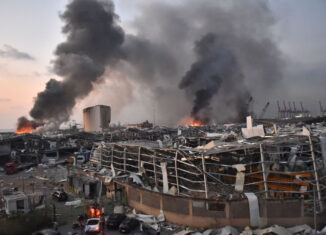 Right when 2020 seemed as though it could not get any worse, yet another tragedy occurred. On Tuesday, August 4th, the city of Beirut, Lebanon, was shaken by a petrifying explosion. After years of previous conflicts and violence, this was the last thing this country needed. As seen on video, a gigantic cloud of smoke covered the air and radiated a huge wave that blasted across the city. 157 people were found dead and another 5000 injured from the event. Buildings and houses were completely destroyed, as well as a few hospitals that were already struggling amid the pandemic. The Lebanese Red Cross has been tirelessly working to save whoever they can, as they presume that tons of people are still buried by the rubble and debris.

According to the President of Lebanon, Michel Aoun, the explosion was caused by massive amounts of ammonium nitrate that was stored improperly for years.  Initially, a fire broke out at Warehouse 12 located at the city’s port, which then triggered firework type explosions leading to a big blast. It is said that the explosions align with typical characteristics of ammonium nitrate detonation, but other causes, such as possible outside interference, are being looked into. Both the President and the Prime Minister are seeking to give severe punishment to any individual involved in causing this incident. Investigation of those in charge of the storage of the ammonium nitrate has begun, and as of now, they are being placed under house arrest.

Despite the effort of officials to seek revenge on the cause of the tragedy, the handling of the event is not sitting well with the majority of the Lebanese people. Thousands of civilians are blaming the incident on the corrupted ruling class, and believe that the investigation is just a way of trying to pin the blame on something else. Protests have broken out in response to this tragic event and have gotten to the point where police officers began tear-gassing. The protests have injured around 170 people, but this will not stop the determined Lebanese people who desire the resignation of the government. It is important for Americans to do as much as possible to support those suffering in Lebanon. There are ways we can donate and try to help, such as donating to the Lebanese Red Cross. As we sit back and endure the rest of 2020, this is just another indication that we have to be ready for more to come.