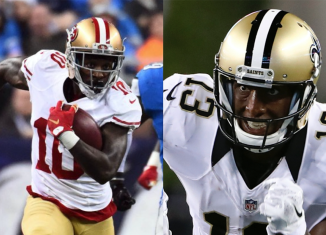 With the NFL season approaching, many fantasy football owners are relentlessly studying away to find this year’s potential breakout stars and sleepers. I have also hit the books and have come up with my top two wide receiver sleepers for this upcoming season.

Thomas was a second round pick in the 2016 NFL Draft. He stands at 6-3 and 212 pounds. Coming out of Ohio State, Thomas was viewed as a work in progress, but the Saints took a chance, and it may pay off. Thomas has shown his big playmaking ability in the preseason which led coach Sean Payton to saying that he’d “try to have him on my fantasy team, I think he’s going to do well.” Payton, along with starting veteran quarterback, have both said that they have high expectations for him. In the offseason, Brees lost his two most effective targets in the red zone in Benjamin Watson and Marques Colston. This leaves the door wide open for Thomas to receive some opportunities when the Saints are looking to throw one in for a touchdown. The Saints number one receiver, Brandin Cooks, is a bit too tiny for the red zone and new tight end Coby Fleener is struggling to pick up the new offense. Thomas’ current ADP is 119 (Round 10); I would take him in Round 10 the earliest because even though Thomas has a ton of breakout potential, he is still locked in a positional battle with Willie Snead and Brandon Coleman. I would take Thomas in the 10th round or later and stash him on my bench until he proves that he can become a weekly contributor in a fantasy lineup.

Ellington is shaping up to be the starting slot wide receiver for the 49ers this year. This excites me because new head coach Chip Kelly runs a fast-paced offense that will produce a high volume of plays. The 49ers don’t project to be very good this year, which means they will most likely be playing from behind. This will force them to throw the football making Ellington a prime target in a Chip Kelly offense. In Jordan Matthews two years in Philadelphia with Kelly, he received 229 targets with a majority of them coming in the slot. The Eagles ran the second most plays last year with a mediocre quarterback. Any player in a Chip Kelly offense can be productive in fantasy even if their actual team is not pulling out wins each week. Ellington is the 72nd ranked wide receiver which makes him a steal in my eyes. Draft him late and plug him into your WR3 or FLEX positions and laugh at the other owners who passed on him in the draft and can just watch as he puts up double digit points week in and week out.