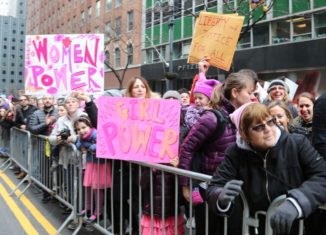 On Tuesday, March 8th, millions of women across the globe rejoiced over the celebration of International Women’s Day. Beginning in 1902, the event has grown to take place in over 70 countries. These places hosted a multitude of events, ranging from peaceful protests to casual lunches, to commemorate the women’s rights movement that is forever continuing and evolving.

This year’s theme, Be Bold For a Change, called on the masses to help forge a better working world and a more gender inclusive world. They utilized the hashtag #BeBoldForAChange that sparked social media all over the world to fight for women’s rights in issues such as the pay gap, abortion laws, and sexual abuse. Not only does the day address all the issues women face to this day, but it also highlights their many extraordinary achievements throughout time. From women earning their right to vote in 1920, times have now evolved to the point that we witnessed the first time a woman came so close to becoming President of the United States.

The world of work is changing, and these results in significant implications for women. On the one hand, we have globalization, technological and digital revolution and the opportunities they bring, and on the other hand, the growing informality of labor, unstable livelihoods and incomes, new fiscal and trade policies and environmental impacts—all of which must be addressed in the context of women’s economic empowerment. The UN also took part in the event with their 2017 theme for International Women’s Day focusing on “Women in the Changing World of Work: Planet 50-50 by 2030.” Only 50 percent of working age women are represented in the labor force globally, compared to 76 percent of men. What’s more, an overwhelming majority of women are in the informal economy, subsidizing care and domestic work, and concentrated in lower-paid, lower-skill occupations with little or no social protection. Achieving gender equality in the world of work is imperative for sustainable development that the women of the UN seek. Thus, the 50-50 goal hopes to have equal representation of women and men in all work fields by 2030.

With millions of women and men fighting for the cause, it is very plausible that women will soon be able to see the gender gap in all aspects of life slowly narrow to a close. Mothers hope their daughters will one day live in a world where they can earn the same as their male counterparts, have the right to control their body, and are able to succeed in every field they desire. From Russia to Iceland, Peru to South Korea, millions of people marched, rallied, and united to celebrate all that women have achieved over the centuries, and all the achievements that are yet to come.