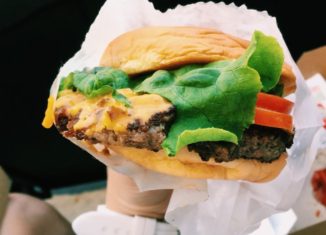 Asking “does Melville needs another burger chain?” is a flawed way of framing the question. It assumes that every hamburger chain is on equal footing, which is not true. If you ask me, Melville absolutely needs another hamburger chain…but only if that chain happens to be Shake Shack. A curious phenomenon happened over the last decade. Restaurateurs recognized that there is a market for upscale takes on rather lowbrow food. Chefs with national profiles, such as Bobby Flay and Michael Symon, launched burger chains of their own, vowing to apply culinary techniques and superior ingredients to their dishes.

Shake Shack was founded 10 years ago by Danny Meyer, the well known New York restaurateur. It began as a summer hot dog cart in Manhattan’s Madison Square Park, but soon turned into a permanent kiosk. The lines were staggering and clearly there was a demand for something bigger. Now there are Shake Shacks from Boca Raton, Florida to Abu Dhabi in the United Arab Emirates to Melville, Long Island!

About a dozen people were waiting outside Melville’s brand-new Shake Shack when it unlocked its doors Thursday, March 30th at 11:01am, but the line quickly grew as passersby saw the spot was finally open. I believe as the initial hype dies down in the coming weeks, Shake Shack will settle into the role as the convenient, agreeable, family and student-friendly chain where you can get much more than just an amazing shake. What makes this burger chain so unusual is that they are committed to using 100% all-natural Angus beef, vegetarian fed, humanely raised, and source verified. No hormones or antibiotics are used EVER. They pride themselves on sourcing incredible ingredients from like-minded artisanal producers.

At Shake Shack, there are of course several different burgers to choose from. I typically go with the simple, yet scrumptious “ShackBurger.” It is a cheeseburger with lettuce, tomato, and ShackSauce on a squishy yellow, potato-like bun. Back to the ShackSauce for a minute. Some say its Russian dressing, but I don’t believe it. It is rather a Thousand Island-style sauce with ketchup, mustard, and mayonnaise. I mean it when I say it is too good to be true. According to many, the burger that deserves the chain’s immense hype is the SmokeShack burger. People rave about this wonderful sandwich ($6.45 single/$9.15 double). Splurge for the double; it’s definitely worth it! I decided to break from the norm and give it a try this time. It’s a bacon cheeseburger with spicy chopped cherry peppers and the infamous ShackSauce. The chopped cherry peppers adds a vinegary zing and the periphery of the beef patties have a perfect crunch from the flat top char. It checks off all my requirements of a satisfying burger. Besides the SmokeShack, everything my family and I tried was excellent. My mom claims that the Chick’n Shack, which is crispy chicken breast with lettuce, pickles, and buttermilk herb mayo could be the best chicken sandwich she has ever had. For all the vegetarians out there, they did not forget about you. The Shroom Burger is incredible even if you are not a vegetarian. This meat free sandwich is a crisp-fried portobello mushroom that is filled with melted muenster and cheddar cheese topped with lettuce, tomato, and, of course, the ShackSauce. Talk about a great way to get your daily intake of vegetables! They offer Flat-Top hotdogs, which I’m sure are fantastic, but there are just too many other things to try. Last, but certainly not least, you can not leave Shake Shack without trying one of their shakes or “Concretes.” My all-time favorite is the salted caramel shake, but I’ve heard the black and white is quite delicious as well. Their Concrete is a frozen custard blended with mix-ins. I recommend checking out the Shack Attack Concrete. It consists of chocolate custard, fudge sauce, chocolate truffle, and cookie dough and is topped with chocolate sprinkles. It is truly a chocolate lover’s dream.

In my opinion, what makes Shake Shack so unique and special has nothing to to do with their actual food. They are committed to extending hospitality beyond the four walls of the restaurant and into the community. The Melville location will be donating a percentage of their money to the Cohen’s Children’s Hospital right here on Long Island. That’s something to be proud of and more of a reason to choose Shake Shack.

Before the line reaches the Walt Whitman Mall, make your way to Shake Shack! I suggest you don’t count calories, but rather enjoy treating yourself to something absolutely fabulous.