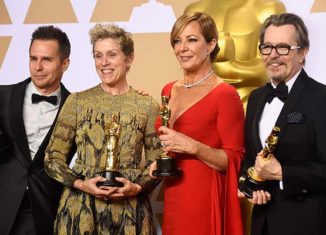 The Academy Awards celebrated its 90th ceremony on March 4, 2018. Executive Producer and host of Jimmy Kimmel Live! returned to host the ceremony for his second consecutive year at the Dolby Theater in Los Angeles. A series of award acceptances and highlights made this televised Oscars event one to remember.

Many deserving actors and their films received the most prestigious awards one can possibly obtain in the industry, a golden statuette. Best Picture was won by The Shape of Water, a film that shares the story of a mute woman who discovers and befriends a mysterious creature in the government laboratory where she works. This picture also sent Guillermo del Toro home with the Oscar for Best Director, and it won Best Original Score and Best Production Design. The Best Actor and Actress Oscars went to Gary Oldman for Darkest Hour and Frances McDormand for Three Billboards Outside Ebbing, Missouri. During her acceptance speech, McDormand applauded all women in the film industry and invited them, led by Meryl Streep, to stand and accept the award with her.

Best Supporting Actor and Actress were won by Sam Rockwell for Three Billboards Outside Ebbing, Missouri and Allison Janney for the biographical I, Tonya about the life and scandal surrounding Olympic figure skater Tonya Harding. Get Out won Best Original Screenplay against worthy nominees, including multiple Academy Award winners The Shape of Water and Three Billboards Outside Ebbing, Missouri, which was surprising given that it was written by sketch comedy writer Jordan Peele and because the Academy rarely seems to award horror films. Call Me By Your Name, a film that has caught the attention of many young adults, won Best Adapted Screenplay. It tells the story of a doctoral student, Oliver, who travels to Italy for the summer in 1983 to intern and meets his professor’s seventeen-year-old son Elio, with whom he ends up falling in love. The film was also nominated for Best Picture, Best Actor with Timothée Chalamet playing Elio, and Best Original Song with “Mystery of Love,” by Sufjan Stevens.

Other non-award highlights included moments from Kimmel’s monologue, in which he offered the gift of a jet ski to the winner with the shortest acceptance speech. Mark Bridges had the honor of taking it home after accepting an award for his costume design in Phantom Thread. Kimmel also showed himself interrupting a screening of A Wrinkle in Time and having celebrities hand out snacks to viewers. Political statements were also present as has become the norm at awards shows. Kimmel did note on the “Me Too” movement by mentioning that it has not been a good year for men in Hollywood. In addition to McDormand’s feminist fueled speech, in their presentation of the award from Best Production Design, Lupita Nyong’o and Kumail Nanjiani introduced themselves as immigrants, from Kenya and Pakistan respectively, and appealed to the Dreamers in support of DACA. Keala Settle’s performance of “This Is Me” from The Greatest Showman, which has become widely known by audiences as power anthem of individuality and self-worth, brought undertones of empowerment and inclusion as well, though it surprisingly did not win Best Original Song.

In all, this year’s Oscars recognized many deserving actors and filmmakers. It was a balance of comedy and the seriousness of politics that today is bound to be present in any broadcast.