You are here
Home > Entertainment > A Flawless Cup of Coffee 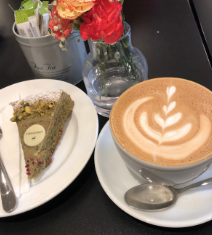 Before creating a flawless cup of coffee, it is crucial to know the background of the unrivaled bean. Centuries ago in Ethiopia, these energy berries were discovered when goats would stay awake through all hours of the night. Word spread through globalization and hit the Arabian Peninsula. As the knowledge of coffee unfurled through the fifteenth and sixteenth centuries, Persia, Egypt, and Syria began to grow this magical berry. This elixir of awakedness became the center of conversation and was, and still is, an important aspect of social gatherings. By the seventeenth century, coffee was introduced to Europe and the worshipped dark beverage was struck by some controversy. Some considered it a curse from satan because of its bitter tang. Regardless of its controversy, coffee became a jewel of European culture. Though Tea was the popular drink in New World, that changed when the Boston Tea Party occurred in 1773. This event altered the prevalence of tea drinking, and the new bride of the wedding in society became coffee. Here are some exquisite coffee recipes for you to enjoy:

Fill a glass halfway with ice cubes, pour Almond milk (or whatever milk that is desired) into the glass to fill it ¾ full, then pour a shot of espresso on top and watch as the illustrious coffee swirls through the crisp white of the milk. Enjoy!

Pour a shot of espresso into a small cup and put as much sugar as preferred into it and stir. Pour milk (whole milk is the most delicious, Almond milk is great as well, but many types of milk will work) into coffee frother to create froth. If you do not have a coffee frother, there is a little trick. Warm Milk in the microwave or on the stove and pour it into a coffee press. Move the filter up and down until the milk is frothed. Once froth is complete pour it atop the espresso and sprinkle a little bit of cinnamon over the drink! Drink in a classy manner! 😉

Cold Brew with salted foam (a rendition of the Starbucks recipe):

To make the Cold Brew soak ¼ cup of ground coffee in a cheesecloth and pour ½ cup of cold water over it. Keep in the refrigerator for 15- 24 hours (depending on the preferred strength of the coffee). When ready, strain the coffee. For the salted foam put a cup of non-fat/fat-free milk (it has to be this type) in a blender with a pinch of salt and blend. It will be done when it looks a little fluffy and has doubled in size. To prepare the drink fill a glass halfway with ice cubes and pour the Cold Brew in leaving some room empty at the top. Pour the foam over it! Savor this delicious concoction.