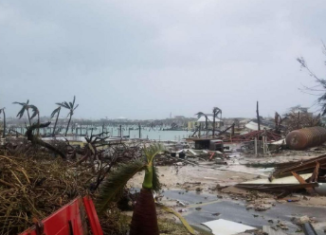 The second hurricane of the 2019 season recently formed, and it was quite invincible. By the name of Dorian, this cyclone arose from a tropical wave in the central Atlantic Ocean on August 24th. Dorian was officially classified as a category 5 hurricane- the largest classification there is. Arriving in Grand Bahama Island with winds sustaining at 110 mph, the storm slowly hovered and caused extreme damage. The rescue efforts are quite dangerous as streets are filled with high water levels. Many government and police vehicles have been submerged in water, making it very challenging. Some areas on the islands were faced with damage much worse than expected, also causing many residents going out of their way to assist in rescue. Dorian is being called “a historic tragedy” to those in the Bahamas.

Dying down to a category 2, Dorian moved close to the east coast of Florida and eventually battered parts of the Carolinas. Multiple evacuations were ordered in Georgia, South Carolina, North Carolina, and Florida. In addition to the danger and concern for public safety, there are other negative consequences of a storm of this size.  Economic losses could total in the billions of dollars due to the storm’s destructive path. There have already been over 2,400 reports of price gauging in Florida, as certain businesses are taking advantage of desperate citizens, raising the prices of necessities from food to gasoline. There is still a chance that Dorian will not make landfall in the United States, and may instead simply hug the southeast coast; even if this happens, it could still cause severe problems, such as massive storm surges and flooding rains. Natural disasters like this cause tremendous damage, making it essential for people to offer their help and stay positive in order to overcome these unfortunate situations.