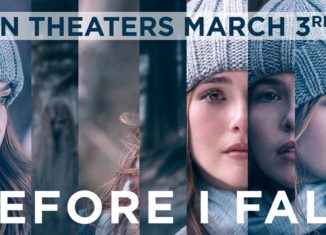 The recently released mysterious thriller Before I Fall will keep you on the edge of your seat for the entire movie. Produced by Jonathan Shestack, Matt Kaplan, and Brian Robbins, and directed by the amazing Ry Russo-Young, the movie was destined to be astounding. Besides the people working behind the scenes who made the film great, the actors and actresses brought the plot to a whole new level. Zoey Deutch, known for her roles in Why Him?, Dirty Grandpa, Beautiful Creatures, and Vampire Academy, went above and beyond in portraying the main character of the thriller, Samantha Kingston. Halston Sage, Kian Lawley, Logan Miller, and the rest of the cast did a fantastic job in bringing their characters to life.

The film is based on the thrilling novel Before I Fall, by Lauren Oliver. This book is a page-turner and is very hard to put down. Before I Fall narrates the life of a high school student, Samantha Kingston, who seems to have her whole life put together perfectly. With her popular boyfriend, Rob, played by Lawley, and loving friends, everything seems to be going great for Sam, until one night when everything changes. In the blink of an eye, Sam’s life turns upside down when she dies in a car crash. However, this is not the end of her journey; it is just the beginning. Sam magically wakes up the next day, and for the next 7 days, she is given a chance to fix what was wrong in her life and must unravel the secrets of her past to positively change her future. With each day, Sam learns something new about herself and her friends that allows her to understand that the power of friendship and treating people with respect can go a long way. However, for Sam, it seemed that some things in life are inevitable, and you can’t change the past too much. So, does Sam escape her death and learn from her mistakes, or not? Watch Before I Fall or read the book by Lauren Oliver to find out!