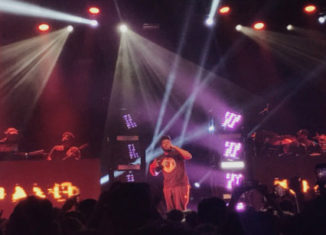 Nineteen year old singer-songwriter, Khalid Robinson, known simply as Khalid, is a rising star in the music industry. Khalid first got his rise to stardom with his hit song “Location,” released in February of 2017 along with the rest of his “American Teen” album. His contemporary R&B music style quickly gained popularity as almost every teen across America was singing “send me your location” whenever it came on the radio. Now, Khalid has a double-platinum debut single for “Location” and a gold certified debut album for “American Teen.” Since Khalid is only 19, this is only the beginning for him.

On Sunday, August 13th, Khalid hosted his American Teen concert tour at Terminal 5 in New York City. Since I am a huge fan of his, I of course attended. The venue was packed full of teenagers and young adults waiting to see their favorite singer. Before the concert started, a DJ played music and remixes to pump up the crowd. After waiting for what seemed like hours, I heard the introduction to his hit song “American Teen,” and I jumped and screamed for the performer. At exactly 9 pm, Khalid jumped on stage full of energy singing the first song to his album. The crowd immediately started screaming his name and singing and dancing along to his music. Next, he played another one of his hits called “8teen.” As the concert continued and he sang all of the songs I knew all of the words to, he brought out a surprise for the crowd. It was rappers PnB Rock who sang their song “Selfish,” then put the spotlight back on Khalid. Once “Location” came on, the crowd could not hold in their excitement. From the beginning of the song to the end, I did not stop singing. Lastly, Khalid closed the concert with “Young, Dumb, & Broke,” along with balloons and confetti, which was definitely a great end to a great night.

His concert was a blast and I would go again in a heartbeat. His songs preach the freedom of the teenage years and show how American teens should have fun and live life to the fullest. The fact that he is only 19 and is already so successful really shows that you can follow any dream you want to. Deep down, we are all just American Teens.