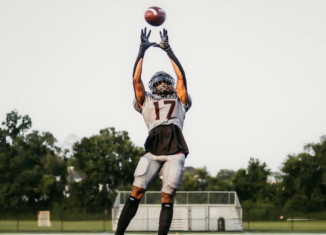 The Lions struck first early, with a 39 yard rushing touchdown from the senior Sal Calderone. The Lions were able to move the ball very efficiently up and down the field where the Thunderbirds were lost strategically. In the second quarter, junior quarterback, Jordan Heyman, was sacked in the endzone costing a safety to the T-Birds, putting 2 more points on the scoreboard for the Lions and the ball back. Late in the second quarter, Jovanny Brown for the Thunderbirds punched in six giving the T-Birds some momentum right before halftime. Coming out of the gates after halftime both teams played exceptional defense stopping each other on both sides of the ball. After his tremendous run early in the first, Calderone took it 21 yards to the house for another rushing touchdown. This 21 yards contributed to his 113 yards to end the game. The Thunderbirds were stopped again in the fourth, as senior quarterback Ben Schops subbed into the game for Heyman. Schops drove down the field completing two passes, eventually overthrowing the junior wide receiver Max Futter over the middle field which turned into an interception by Rocco Carpinello. Following the play Schops felt upset and felt he let his team down “Felt like people had to rely on me. Even though it’s my moment. I’m doing it for the team and my teammates.” This interception sealed the game and the win for the Lions.

The Thunderbirds fumbled the ball three times and were not able to advance the ball through the air. Although the run game worked as Brown rushed for 105 yards, the T-Birds could not seem a way to hit the receivers in stride to punch in 6 points. West Islip came out on top defeating the Thunderbirds 16-7 in a very run-heavy and ground and pound game.