You are here
Home > Sports > Are Fans Ready for the New NBA? 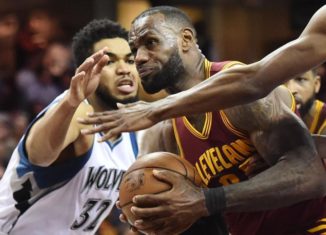 As the 2016-2017 NBA season came to a close in June, new questions began to surface around the league. The biggest question: How can anyone stop a superteam? The question was, at the time, completely valid. The Warriors had just won the NBA championship with a backcourt of Steph Curry and Klay Thompson, as well as Draymond Green and newly-acquired Kevin Durant in the frontcourt. However, the Warriors championship was very controversial. When the Warriors signed Durant in the previous offseason, fans and teams of the league were irritated. With a team like that, how was anyone else supposed to win? The answer has still not been determined. Regardless, the teams of the NBA definitely shook up the league this year. It is safe to say that the Cavaliers and the Warriors have some better competition than in years past.

After a 26-56 season, the Los Angeles Lakers knew they needed to adjust their roster. After D’Angelo Russell’s inconsistencies last season, they decided to trade him and center Timofey Mozgov to Brooklyn in exchange for veteran center Brook Lopez. Lopez had been putting up great numbers in Brooklyn for the past few seasons and will provide an upgrade for the Lakers in the center spot. As for their point guard position, they filled it with rookie sensation Lonzo Ball out of UCLA. Even though their team isn’t what it used to be, the Lakers have the potential for a great season this year.

The Boston Celtics were able to make it all the way to the Eastern Conference Finals last season. Even though their loss to Cleveland was inevitable, they still attempted to upgrade their team this offseason. And boy, did they succeed. Gordon Hayward was coming off his best season in Utah. Now an all-star, the 27 year-old spent the last 6 seasons with the Jazz. After averaging more than 20 points that season, he was looking to get out. He signed with the Celtics on July 14 and is sure to fit in well there alongside his former college coach Brad Stevens. Another move made by the Celtics, and perhaps the biggest move this offseason, was to trade Isaiah Thomas and Jae Crowder for Kyrie Irving. This is the first trade in NBA history where two players coming off 25+ points per game were traded for each other, and it is bound to shake up the NBA. It is also being disputed which team came out on top. Regardless, the Celtics now gain a dominant point-guard in Kyrie Irving, and the Cavs now gain an up-and-coming point guard and a fierce forward in Isaiah Thomas and Jae Crowder.

Another major move was Jimmy Butler being traded to the Minnesota Timberwolves. The Wolves are full of potential. With Karl-Anthony Towns and Andrew Wiggins already on the squad, the team lacked a leader with experience and defensive skills. Jimmy Butler gave them exactly that. An all-star himself, Butler had been playing in Chicago with his rise to shine just a few seasons ago. Ever since then, “Jimmy Buckets” has been on a tear. He will certainly help the Wolves improve their record this season.

With many changes set for next season, the teams of the NBA will look to utilize the new assets brought to their teams over this offseason. After all of the deals, a new question has been brought to light: Will there be a new champion?