You are here
Home > Entertainment > The Latest Details on the New Stranger Things Season!! 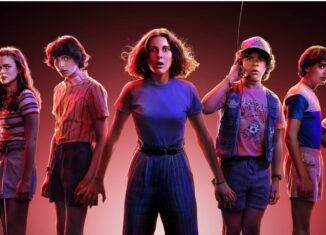 The creepy, gory show we all know and love is returning for yet another season, and we cannot wait to see what they have in store. Season 3 left viewers with a major cliffhanger, and we are eager to find out what happens next. To recap, Joyce and Hopper went to the Starcourt Mall to turn off the large machine that was operated to open the gate. An evil Russian man entered the scene and tried to kill Hopper, so he wouldn’t shut off the powerful device. We have seen this man before, and we know the immense amount of strength he has. Joyce, observing from the control room, watched this battle between the men play out, and Hopper shockingly won. Hopper couldn’t return back to the control room without getting a deadly shock, and when the machine turns off, the room will be obliterated. With no other choice, Joyce turned the machine off, and the whole room experienced a series of deadly electric waves that could kill anything in it, including Hopper. At least that’s what we thought…

After the machine was turned off, Hopper was nowhere to be found, and he was assumed to be dead. Joyce made it out alive, and everyone was heartbroken to hear the unfortunate news, especially Eleven. Joyce, Will, and Jonathan decide to move away and get a fresh start, and in honoring Hopper’s wishes, they take Eleven along with them. This third season concluded with the heartbreaking scene where they say their goodbyes, pack up their stuff and drive away. Everyone thought that it would end right there, but at the very end, they brought us to a prison in Russia. As the guards passed by all the prison cells, one guard states, “Not the American.” This got us hopeful that maybe there’s a chance that Hopper is alive, but instead far away from his hometown of Hawkins. As rumors started to brew after this final episode, a teaser for season 4 was released showing Hopper working on a snowy mountaintop in Russia. Now, it is confirmed that Hopper is alive, but the new question is how will Hopper communicate to his friends in Hawkins all the way from Russia. The answers to these questions will hopefully be answered in season 4 of Stranger Things.

The Duffer brothers have already announced that there will be eight new characters joining the cast of Stranger Things in season 4, all with varying roles. Already announced is the addition of Robert Englund, better known as Freddy Krueger, to the cast. If they were going for scary, he is definitely a good choice! The man who plays Steve Harrington, Joe Keery, reveals that Stranger Things season 4 is possibly the scariest season yet. The Duffer Brothers told The Hollywood Reporter, ‘”There’s a little more humor in it, a little more action, and it just has a different feel than the past two seasons, which were set in the fall and a little more dreary and scary.”

Although everybody is anticipating the arrival of the new season, there is no official release date because they had to temporarily shut down filming during the Covid-19 pandemic. Season 4 is, however, expected to be released sometime in late 2021. We expect the return of Hopper in the new season and also a new horror back in the states. The Duffer brothers announced that this horror is something long-buried, and it connects everything together. Due to the more complex details of season 4 to make it more frightening, this season will be shot in New Mexico instead of Atlanta. Fans of the Netflix original series are exhilarated and eager for the release of the new season!