You are here
Home > Entertainment > Aliens on Earth, First Look at “The Arrival” 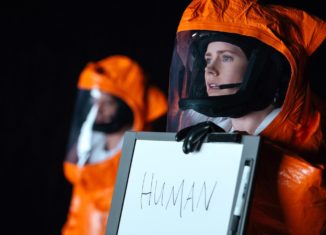 Have you ever wondered what it is like to have aliens visit us here on Earth? Well, the mysterious science fiction movie Arrival gives you a first hand look at what it would be like.

The movie features Amy Adams as Louise Banks – one of the top linguistic professors who leads an elite team of investigators to decipher the language of a mysterious alien group that landed ships in 12 different locations on Earth. Hoping to unravel the mystery, Banks risks her own life and possibly all of mankind in order to learn the language of the unknown. While all nations were on the verge of a global war, Banks and her crew raced against time to find a way to communicate with the extraterrestrial visitors. Her crew stars Oscar-nominated actor Jeremy Renner, who plays Ian Donnelly, a theoretical physicist and mathematician, and actor Forest Whitaker as Colonel Weber. As Banks begins to reach a possible answer, she experiences a multitude of psychic phenomenons and future telling powers that allow her to eventually figure out the “Universal Language” and end the global tensions that almost result in war.

Well, how did Banks do it? You’re going to have to watch the movie to find out. The movie was definitely a brain teaser and leaves you wondering after it finally ends. If you enjoy sci-fi movies and like to be on the edge of your seat, this is definitely the movie for you.