You are here
Home > School News > A Taste of Different Cultures: International Banquet 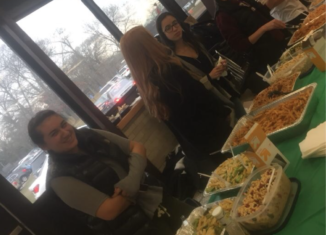 The 2016 International Banquet was a tremendous success! For those who don’t know, the International Banquet at High School East is an annual after school feast prepared by the Spanish, Italian, and French culture clubs and honor societies and held in the school cafeteria. The members from each club contribute by bringing in ethnic foods from their club’s particular culture. The food that students brought in this year was both store bought and homemade, but everything was most definitely tasty. Some examples of the dishes that both students and teachers got to indulge in at the banquet were the following: various assortments of pasta, catered by the Italian Club; fresh burritos, actively being made by Spanish Club members; and crepes, excellently prepared by the French Club members. The dishes listed above provide only a small glimpse of the numerous delicious cultural foods that each club provided for attendees. Although the banquet officially started at 2:20 in the afternoon, the line was out the door from the minute the school bell rang at 2:00. With that being said, the event’s turnout was amazing, but unfortunately there were no leftovers! At least that meant that everyone who attended got to try new cultural foods and enjoy them. In addition to the International Banquet being a great way to learn about different ethnic foods and try them while socializing with classmates, the banquet is also charitable. In order to enter the banquet, both students and teachers were asked to purchase a five dollar ticket. All of the money that is collected from ticket sales was donated to a relative of one of the teachers here at HSE who is battling Leukemia. Knowing that the money spent purchasing the ticket goes to help someone battling such a horrible disease helps make the event that much more enjoyable for the teachers and students who attend.  Overall, this year’s International Banquet ran very smoothly and was definitely a great learning experience for everyone. If you were not able to make it to this year’s International Banquet, don’t worry, there’s always next year!