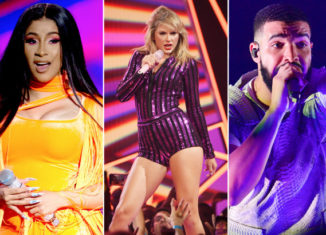 After 40 years, the MTV Video Music Awards has come closest to home aside from watching it on your own television. This August the Prudential Center in Newark, NJ was packed with celebrities and music fans for a night hosted by comedian Sebastian Maniscalco. Sebastian Maniscalco opened up the show with his comical monologue, poking fun at his mother frying zucchini and the camera angles. Taylor Swift brought fun and enthusiasm onto the stage as she performed “You Need to Calm Down” and “Lover.” She set the bar high for the night with her summer vibes and romantic opening number. Later in the evening, Taylor won the Video for Good award for her song “You Need to Calm Down.” After the iconic performance, hilarious and bold female rapper Cardi B won the Best Hip Hop VMA for her music video “Money.” While everyone was waiting for Shawn Mendes to perform “Senorita” with Camila Cabello, which came later in the evening, he kicked off his VMA performances with his song “If I Can’t Have You”; after, Rosalia and J Balvin won the award for Best Latin Music Video. New female artist, Lizzo, rocked the stage with not only her incredible performance but with her amazing anthem to self-acceptance. After a successful year for these brothers, The Jonas Brothers performed “Sucker” from The Stone Pony Club in Asbury Park; they finished their performance singing to “Only Human” after moving the performance outside with fireworks lighting up the New Jersey beach. Performing at the VMA’s for the first time in 16 years, Missy Elliott proved she was the female boss of hip hop with her incredible performance to a mash-up of her iconic songs followed by her acceptance of the Video Vanguard Award. Winning Song of the Year, Billy Ray Cyrus and Lil Nas X took the stage to receive the award while putting a little humor into that meaningful moment. The last two awards went to the Jonas Brothers for Best Pop Group and Billie Eilish for Best New Artist. Normani delivered an incredible rendition of her new song “Motivation.” Other performers included Lil Nas X, Miley Cyrus, Rosalia and Ozuna, H.E.R., Big Sean and ASAP Ferg, J. Balvin and Bad Bunny, and other New Jersey icons. The 2019 VMA’s was definitely a night where sitting, dancing, and singing at home in front of the TV was acceptable. As music has transformed over the years, the VMA’s continue to celebrate music the way it was always supposed to be – performed for the world to hear and see.