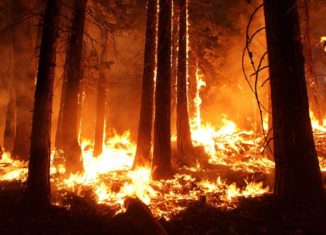 Over the past year, and more specifically the past month, there has been a record-breaking number of fires throughout Brazil and throughout our Earth’s most vital ecosystem: the Amazon. The Amazon is to the Earth what the lungs are to people. It is the world’s largest rainforest, and it plays a major part in slowing down climate change and reducing greenhouse gases in the atmosphere. With that perspective, it is clear that the burning of this rainforest is extremely dangerous and a serious threat to our environment. Of the 80,000 fires in Brazil this year, over half have been in the Amazon.

It has been proven that these fires are due to slash-and-burn farming techniques and deforestation. Many times, farmers will cut down entire patches of forest and then burn out the area to ensure better soil and farming conditions. While this practice may be helpful for the agriculture and development industry, it is significantly harmful to our planet. Even though there is evidence connecting these practices to the fires, major controversy still surrounds the issue. Research shows that as the fires continue to burn, the lasting effects spread, killing trees and drying the landscape. This causes the forest to become ever more prone to fires.

The President of Brazil, Jair Bolsonaro, has turned a blind eye to deforestation. He has instead been focused on expanding development in the Amazon and blames the fires on other reasons. As a result of this, there has been great opposition towards the President and his administration. Additionally, the Initiative for the Integration of the Regional Infrastructure of South America, a plan to build roads, dams, and rail lines throughout the Amazon, is heightening people’s anger. This development would only make the extreme fire worse.

People throughout the world and especially in Brazil are now living in fear. Fear that if their government doesn’t take immediate action, the effects on our ecosystem will be irreversible and drastic.