You are here
Home > Entertainment > How Music Affects the Brain 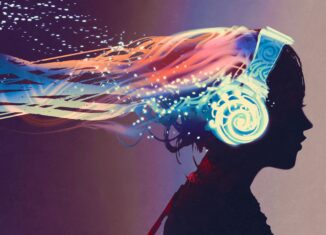 Music is vocal and/or instrumental sounds combined in such a way as to produce beauty of form, harmony, and expression of emotion. It is something we often listen to when going out with friends, driving in a car, or even just for fun. But the actual effects of music on the brain are overlooked by the general public when, in fact, it is more helpful than you think.

For many years, scientists have been publicizing the results of various experimental studies concerning music and its effect on the brain. These studies drew so much attention that the University of Central Florida, in addition to many other schools, developed a course called “Music and the Brain.” The course, taught by professors Kiminobu Sugaya and Ayako Yonetani, explores how music impacts brain functioning and human behavior. Through this course, students discovered that music can do way more than just provide a good dancing song for you and your friends during a night out on the town. They learned that music can change your ability to perceive time, boost your immune system, assist in repairing brain damage, make you smarter, evoke memories, and even help people who suffer from diseases, such as Parkinson’s, Alzheimer’s, or dementia. Some question whether or not these claims are true especially when it comes to music and patients suffering from diseases that include degeneration of the brain. However, these facts have been proven through MRI scans of the brain. Professor Sugaya states that in MRIs taken of patients suffering from Alzheimer’s, “lots of different parts of the brain light up,” when music from their childhood is played. According to Sugaya, this shows that “memories associated with music are emotional memories, which never fade out.”

Along with information about studies concerning music and the brain, the University of Central Florida’s website provides amazing insight into the effects of music on the brain by using an interactive diagram. It is a diagram of the human brain and you are able to click on any part of the brain to gain information about how exactly that part of the brain is affected by music. For example, when clicking on the “frontal lobe,” the text beside the diagram informs you of its functions. The frontal lobe is used in thinking, decision-making, and planning, and it is the most important part of the brain. Professor Sugaya states that by listening to music, one can enhance the functions of the frontal lobe!

Music is a huge part of our culture. Whether it’s pop, rock, hip hop, or classical music, almost everyone listens to music on a daily basis. However, don’t let the medical and psychological benefits of music be overlooked by its frequent use in our daily lives. Music affects the brain in so many positive ways. It can help you remember childhood memories, make you smarter, and boost your immune system even if you don’t realize it. So next time you are on the way to work or school, be sure to turn on the radio because you never know what positive effects it may have on you!