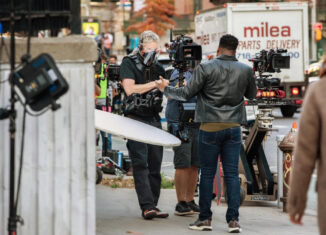 After almost seven months of watching repeats of your favorite shows on TV, or binging Outer Banks, All American, or Stranger Things on Netflix, TV shows are finally filming again! However, the real question is, how are TV shows able to film in the midst of a global pandemic while still ensuring the safety and health of all those involved?

Throughout the past month or two, producers have found innovative ways to not only workaround but also tackle the obstacles COVID-19 throws their way during filming. A common trend between some of the new shows being released, such as The Conners and Grey’s Anatomy, is to actually incorporate the pandemic into the storyline of the show. When The Conners returned to TV, they did so with masks and urgent temperature checks in the very first scene. Executive producer Bruce Helford brings attention to the fact that COVID-19 will dominate much of their 3rd season, but believes that “[it] would be natural that [the characters] would be in the middle of this…[they] felt that it was an obligation to…[their] viewers and to stay relevant and to show them what it’s like for a family that knows how to get through hard times but is thrown a curve like never before.”

Apart from addressing COVID-19 in the plot of the episode, shows have allowed for fewer cast members on set, spaced out to comply with social distancing guidelines. Scenes have been constructed so everyone is kept at a reasonable distance. Additionally, as said by Dave Caplan of The Conners, “scenes with an awful lot of extras really are kind of off the table for now.” During these times, the fewer people on set, the better. Dancing with the Stars also must film with this mindset. The show is no longer hiring backup dancers or using huge set pieces to avoid the need for large crews. Dancing with the Stars has also taken advantage of technology in response to COVID-19, as rehearsals are now shot by remote cameras instead of manned crews to limit the number of people in the studio.

Some shows are going even further to limit personnel on set. The Drew Barrymore Show, for example, has resorted to the use of a green screen to give the illusion of guests being present in the studio while they are actually at a remote location. Other shows, like The Masked Singer, have forbidden live audiences and instead are relying on tapes of past seasons’ cheering crowds.

In Supermarket Sweep, which began taping in July, cleaning supplies are of the utmost importance. Executive producer Alycia Rossiter reveals that they “cleaned that store like crazy between every round….[and] Purell-ed [their] hands so much.” To further abide by safety laws, everyone on set is required to wear a mask, excluding the contestants and host Leslie Jones.

Shows have also found new methods of interaction between characters when actors can’t work alongside each other. As intimate scenes have become extremely tough to film, shows have turned to the use of mannequins, as shown in the soap opera The Bold & the Beautiful. Other shows, such as Black-ish have gotten very creative with the inability to interact. Star Tracee Ellis Ross asked her producers if there “[would]…be a way for [them] to do an episode that was animated” since she did not feel ready to return to set. The result of this animated episode was aired on October 4th, and it came out very nicely.

Isolation has also played a crucial role in the success of filming TV shows, especially in intimate shows like Love Island and The Bachelorette. Other casts have undergone two-week lockdowns altogether. Katheryn Winnick of ABC’s impending Big Sky says that they “all spent quarantine together and…started chatting with each other every night and checking in… and actually did a couple of game nights.” This lockdown actually can be considered a benefit, as it allows for the stars of new shows to get to know one another.

Unfortunately, the Coronavirus has also been an excuse to cancel shows. The second seasons of ABC’s Stumptown and Showtime’s On Becoming a God in Central Florida were both canceled due to concerns regarding COVID. However, in light of the pandemic, new shows have been created focusing on many relatable experiences from quarantine, such as socially distanced get-togethers and zoom reunions. NBC’s new sitcom Connecting… and the Netflix anthology series Social Distance both reflect these ideas.

Overall, it is clear that regardless of a pandemic, producers and actors have been working, and will continue to work, tirelessly to give their viewers high-quality episodes weekly. Even though some TV shows incorporate COVID-19 or are limited to what they can film due to the pandemic, the regular airing of TV shows helps to provide a sense of normalcy throughout these challenging times.