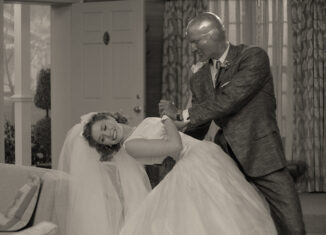 While the Marvel Cinematic Universe is unlike any film franchise seen before, its wild success and cultural impact has something to do with a formula that’s used over its projects. Not that every film is the same or predictable in any way, but there is a structure they tend to follow when it comes to cinematic releases. For their first home release on Disney+, they blew that out of the water. Kevin Fiege and the Marvel Studios team prepared something for fans that is unlike anything they’ve seen before: a sitcom starring two Avengers…but it’s not that simple.

The series follows Wanda Maximoff, who hasn’t had a break from trauma in her life. She was born into a war-torn country and saw both parents die due to the war. She and her brother Pietro were experimented on, granting them superpowers, and some years later, Pietro was killed in front of her. Three years after that, her significant other, Vision, died twice (It’s complicated).

She was blipped away by Thanos, along with half of all life in the universe, only to return five years later with nothing. As a child, Wanda used sitcoms as an escape from her harmful environment. In desperation to rid herself of her pain, she uses her reality-bending powers to create a sitcom world, where she and Vision can live happily. There are some unforeseen consequences to those actions though.

In the space she creates, she simultaneously imprisons a whole New Jersey town, trapping them in her sitcom bubble (known as “The Hex”) and taking their daily lives away from them. Wanda’s intentions weren’t necessarily villainous, but in her self-fulfilling actions, she managed to cause major harm. The first episode, “Filmed Before a Live Studio Audience,” is shot in a 1950’s sitcom style channeling that of the Dick Van Dyke show or “I Love Lucy.” The rest of the sitcom-styled episodes include homages to Bewitched, The Brady Bunch, Full House, Malcolm in the Middle, and Modern Family, along with other inspiration pulled from various shows.

What truly makes the show interesting though, is its element of mystery. The show starts off in full 1950’s sitcom style with no context or explanation, leaving a viewer who’s uninformed about the plot or hasn’t seen any trailers very confused. In the early episodes of the show, there are a few moments where the viewer senses something is wrong. This is symbolized by either a voice repeating “Wanda! Wanda! Can you hear me?” or random objects appearing in The Hex with no explanation. As more episodes come out, there are more and more of these eerie occurrences, keeping the viewer interested and concerned. Without any spoilers, these random creepy moments that seemingly make no sense have great payoffs and explanations in the later episodes.

Overall, “Wandavision” is an astonishing show. Its attention to detail based on the period it takes place in, writing, performances, and all of the other elements are top-notch. We’ve come to expect greatness from Marvel and Disney as a whole, but watching them make risky moves such as this show and still succeed is even more impressive than usual. An entertaining (and confusing) watch for new viewers, and an emotional and intriguing one for longtime MCU enthusiasts, Wandavision is another success for Marvel Studios.