You are here
Home > Op/Ed > The Texas Power Crisis 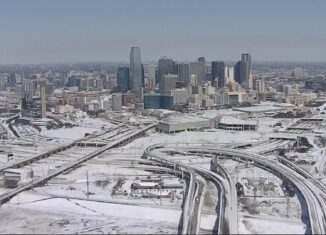 In the early months of 2021, the state of Texas experienced an unimaginable disaster. For four days, millions of people in Texas—the so-called energy capital of the world—shivered in the dark, unable to turn the lights on or run their heaters during some of the coldest days in decades. Texas’s infrastructure suffered a type of multisystem failure as pipes began to burst inside homes and cell networks went down. In Austin, the water system depressurized, contaminating the supply and forcing residents to boil their water before using it. At least 30 Texans died, including a 75-year-old man whose oxygen machine lost power and an 11-year-old boy who contracted hypothermia. Desperate families tried to stay warm by running generators and grills indoors, which led to more than 450 carbon-monoxide poisonings.

Snowfall started across Texas on a Sunday after a polar vortex fueled a historic storm across the entirety of the United States. At least 150 million people nationwide were under ice as the snowstorm continued to intensify, and much of the country experienced record-setting low temperatures. As Texas is generally not known for its winters, it was not prepared for such extreme temperatures. The outages were a result of both an unprecedented demand for energy and winter temperatures colder than usual, which stunted the state’s power infrastructure. Usually, three in five Texans warm their homes with electric heaters. These heaters suddenly needed a lot of power, and since the system that Texas has didn’t have that power, it failed. This failure cascaded down the power lines, causing this disaster. Texas politicians had an early explanation for this occurrence. “Our wind and our solar got shut down, and they were collectively more than 10 percent of our power grid,” Governor Greg Abbott told Fox News’s Sean Hannity, “It just shows that fossil fuel is necessary.”

After enduring multiple days of freezing temperatures and people dripping faucets to prevent frozen pipes from bursting, cities across the state warned residents that water levels were dangerously low and may be unsafe to drink. Many Texas cities began issuing boil notices, asking residents to boil tap water for drinking, cooking, brushing their teeth, and making ice. Houston Mayor Sylvester Turner tweeted, “Water pressure is very low. Please do not run water to keep pipes from bursting.” As with most climates and other social crises, mutual aid groups and other organizations had filled in the gap to aid the most vulnerable people and communities. Statewide warming centers run by both cities and churches opened up for stranded motorists and people still without power. Donation drives popped up in cities across the state to help unhoused people acquire bedding, linens, and other household items.

After this surprising occurrence of low temperatures, Texas is now prepared for a potential future crisis. What was seen during this time was nerve-wracking, and we hope this never happens again in Texas, or anywhere else.