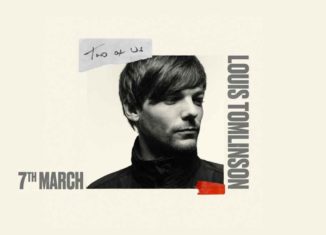 By: Alexa Garbus and Alyssa Garbus

On March 7th, Louis Tomlinson, ex-member of the boy band One Direction, released “Two of Us,” his fifth solo song. The song is up close and personal, reflecting Tomlinson’s sentiments regarding his mother, Johannah Deakin. She passed away at the age of 43 on December 7th, 2016, losing her year-long battle with leukemia. The lyrics speak of “living one life for the two of us,” and lays out a scene of Tomlinson calling his mother’s phone just to hear her voice again. The lyrics to this song are raw, including a line where Tomlinson confesses “the day that they took you, I wish it was me instead.”

His vocals are almost as raw as the lyrics, with a few cracks here and there to key the listener in on the emotional value of the piece. The beat and instruments utilized also seem to reflect more emotion but also present a song that is sure to get stuck in the listener’s head. This song is a follow up to previous hits, including “Just Hold On,” “Back to You,” “Just Like You,” and “Miss You.” “Miss You” came out on December 1st, 2017, just before his mother passed away. “Two of Us” is more raw and emotional than the likes of “Miss You,” and many other songs, such as “No Control” and “Little White Lies,” which he wrote in his One Direction days. Tomlinson promises that his debut album will be released by the end of 2019, and his fans are anxiously awaiting a more definitive release date. For more masterpieces like this one, make sure to buy and stream “Two of Us” and his other works.