You are here
Home > Entertainment > Netflix Welcomes The Umbrella Academy 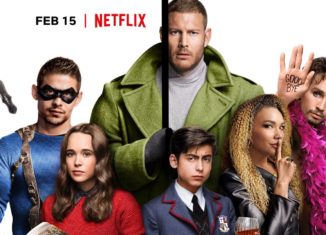 The Umbrella Academy was made available to Netflix viewers on February 15th, 2019. The show begins with some necessary and intriguing background knowledge about the main characters of The Umbrella Academy. Seven newborns are adopted by a single man. He is prompted to do this because each baby is extraordinary in their own way. Each of these children was birthed on the same day; however, their birth mothers were entirely unaware of their pregnancies prior to giving birth. Reginald Hargreeves, the adoptive father of this rare breed of children, distinguishes his family by publicly naming his children as a group called “The Umbrella Academy.” During their entire childhood, they all are trained to discover, control, and use their powers for the benefit of society. As they age, fighting crime begins to fade away from their interests. Luther, Vanya, Carlos, Five, Klaus, Ben, and Allison all follow separate paths. It is not until Reginald, their adoptive father unexpectedly passes away that the crew is forced to reunite. Their communication may have been abolished, yet their unbreakable connection sustains. They enter the unfamiliar mansion that they once called “home” under circumstances that envelopes all of them with conflicting and confusing emotions. “The Umbrella Academy” fall into their old habits of getting themselves into trouble than having to use their gifts to defeat the many antagonists that they come across. The series is a successful combination of romance, science fiction, humor, and action in just ten episodes! The Umbrella Academy is definitely a binge-worthy Netflix hit.