You are here
Home > Entertainment > “We Won, Mr. Stark” 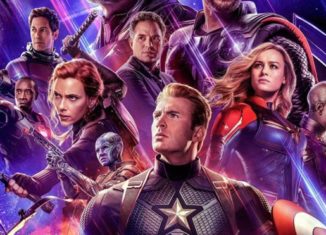 For the past eleven years, fans have watched in awe as their favorite comic book heroes have come to life on the big screen. We’ve seen them fight alien invaders, murderous robots, domestic terrorists, and even each other. Despite it all, our heroes still seemed invincible. However, the entire Marvel Cinematic Universe changed in 2018 with the release of Avengers: Infinity War, which marked the beginning of the end for this era of heroes. Fans waited for a year, anxiously anticipating the finale to the culmination of almost fifty hours of movies. Finally, on April 26th, 2019, fans got their wish.

In its opening weekend, Avengers: Endgame earned around $360 million domestically, and has only earned more since. As of May 19th, 2019, the film has earned around $771 million domestically, making it the second highest-grossing movie in U.S. history. Outside of our country, the film made around $1.9 billion, making its worldwide total a whopping $2.6 billion. Given that its production budget was $356 million, it’s clear this film was one of gigantic proportions.

As this is a spoiler-free review, it’s difficult to discuss every single detail in the movie. However, as a Marvel fan, and a fan of movies in general, this movie is definitely one of the greats. With a star-studded cast, an emotional and enticing plot, and a fantastic ending, this is the movie that everyone has been waiting for. Endgame is exactly what the title suggests: the final chapter for our heroes. After Thanos destroyed half of all life in Infinity War, the remaining Avengers must unite once more and take out Thanos once and for all. However, this is only the beginning of the movie. The rest of the plot takes place five years after the events of Infinity War. In this future, our heroes, along with the rest of the world, must come to terms with their defeat and the toll it took on them in order to move forward with their lives. Although it’s a superhero movie, the central idea is one of the most humane of all: dealing with loss. As invincible as our heroes are, this film serves to remind us that anyone can suffer a loss and feel regret. It is how we deal with that regret, though, that makes us super. For those that have been with the MCU since the beginning or have just recently binged all of the movies leading up to it, Endgame delivers in a dramatic payoff that will leave you teary-eyed and satisfied.

For those that haven’t really been into the MCU, this movie is still good but might not be as good. One of the biggest things about the MCU is how all the movies affect each other and lead into huge plot points for one or more films. If you haven’t seen the prior movies, the plot may not make as much sense to you. With that said, the basic plot is still easy to grasp and the movie will still be loads of fun.

As this saga of superheroes comes to a close, there is still much left for fans to be excited about. The MCU is in no way dead, as Spiderman: Far From Home has been confirmed to release in July 2019. Although some of our favorite heroes may be gone, more heroes are coming. And we can’t wait for them to assemble.