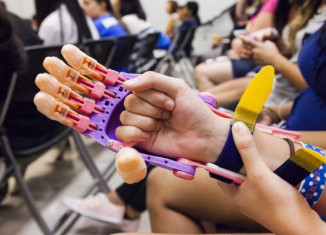 The Hills East Robotics Club (FRC), the Thundercolts, is changing the face of high school robotics teams this school year. The Thundercolts worked with prosthetic hands at the Half Hollow Hills Community Library in order to learn how they function, in addition to the functions of other pieces of innovative technology. The goal of this seminar for the Robotics team was to be able to create their own prosthetic hands in the Half Hollow Hills Library’s 3D printers. The seminar was extremely beneficial to all members of the team as it opened their eyes to the possibilities of creating prosthetics using the technology of a 3D printer.

Half Hollow Hills Community Librarians and E-Nable, a group of people who create prosthetic limbs for free, worked together with the FRC to learn about 3D printing and prosthetic limbs. The library’s supervisors, Margie Hartough and Ellen Druda, also worked hand in hand with E-Nable and the Thundercolts. The librarians think very highly of E-Nable as Margie Hartough described the members of E-Nable as “teachers, students, engineers, scientists, medical professionals, tinkerers, designers, parents, children, scout troops, artists, philanthropists, dreamers, coders, makers and everyday people who just want to make a difference and help to ‘Give The World A Helping Hand.’” E-Nable puts all political and religious beliefs aside to help people who were injured gain back a part of themselves that they have lost.

E-Nable and the librarians were extremely helpful in contributing to the success of this event. Using the 3D printers at the library, the Thundercolts volunteered by taking 3D printed parts and assembling them to learn how to create the prosthetic hands. The volunteers were able to create prosthetic limbs that could potentially be useful for a soldier or ill person. Whether or not a certain limb was donated, the volunteers learned how to work with the 3D printers and now have the knowledge to use these skills in the future.

This event was so special for high school robotics teams in Suffolk county. Suffolk County legislator, Steve Stern, was also in attendance, and he worked right alongside the teams. He issued a press release to educate people in our community about robotics. There was a lot of positive feedback from the Thundercolts following the seminar as they feel that they have been further educated in an their particular area of interest.

After this season ends, the Robotics Club has exciting plans. They plan to print more parts using their 3D printer without the supervision of E-Nable. Not only will they be doing this to learn, but they will also be sharing their results with the entire community. The Thundercolts will be inviting Robotics teams from all over Long Island to join in this amazing advancement for Robotics teams. The Thundercolts have worked very hard to accomplish their tasks and to be able to share their work with other teams.