You are here
Home > HHH Community > Set, Bump, and Spike for The Hills Foundation 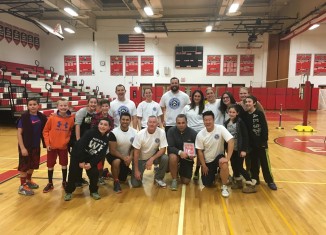 The Hills Foundation hosted the second annual faculty volleyball tournament on February 26th at High School East. In addition to the fans who came to watch the volleyball games and cheer on the teams, there was a silent auction with sports memorabilia, raffles, competition for the fan favorite team, and a 50/50 contest. The spirit was evident with each school having team t-shirts while fans dressed in their school logo’d clothing. Super fans could buy pom poms in their school colors to root for their favorite schools and teachers.

Every school in the district participated including a team from Central Office Administration. The school teams brought in the “big guns” from the staff and teachers to the principals. This year, the winner was West Hollow Middle School who took over bragging rights from last year’s winner, our own High School East. There was a combination of team spirit and competition, and win or lose, participants said that they had great fun.

According to the President of the Hills Foundation, Denise Ham, the event raised over $2600. All of the money raised will go to support grants for teacher projects that are unique, creative, and innovative and that go beyond the parameters of the school district budget. This year’s recipients were given awards at the March 7th Board Of Education meeting. Some of the examples of projects selected include “Computer Science – breaking the CODE”, “Talking Pens” for reading fluency, and “Gear Pulley Equipment” for the Discovery Center.  Mrs. Ham added that she wanted to thank everyone for their support including the players, the people who helped that evening, and those who provided donations.

Many people may not be familiar with the Hills Foundation. The mission of the Hills Foundation is to provide funding and resources for educational enrichment and enhancement in the Half Hollow Hills School District. In the past, the Hills Foundation has supported such projects as: Beijing cultural exchange program, Unity Day, and seed money for both the Robotics Program and Hills on Stage. Additionally, they have arranged speakers for the district.  For example, former Governor Mario Cuomo (after 9/11) talked about the effects of terrorism, Al Gore introduced his book called An Inconvenient Truth, and then Senator Hillary Clinton spoke about service, government, and empowering women. The members of the Hills Foundation give back and serve the Half Hollow Hills community, and they hope to continue doing so for many years to come.

Photo Courtesy of Jill Kauffman from the Hills Foundation