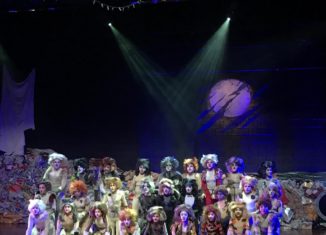 What’s a Jellicle Cat? The West Hollow Middle School Drama Club certainly elaborated on that question on April 22nd and 23rd. Directed by Mr. Iconis of West Hollow Middle School, this production exceeded everyone’s highest expectations as the middle school’s plays have been known to do in recent years. After more than conquering Lin Manuel Miranda’s “In the Heights” in their impressive fall musical, the drama club expected to start holding auditions in early winter for the annual spring show, a broadway review. The casting process tends to be more selective in the spring show each year, so the students selected for this show are among the most talented of their peers. Therefore, director Mr. Iconis and vocal director Ms. Regan made it known that they were considering taking on a much bigger monster, Andrew Lloyd Webber’s “Cats.” With the musical recently making its broadway comeback, the students were anxious to take on this challenge.

This performance had to be one of the hardest yet in terms of preparation. Besides the vocal range required to sing the most famous “Cats” songs, including the most widely known “Memory,” drama club choreographer Chris Brick, who had the extremely intensive task of recreating the exact choreography from the broadway production and teaching it to middle school students. “It was a lot of work, but we all work as the family we have become and we get through it,” said seventh grader Shaun Phillips, who played Mungojerrie in the school’s production. A lot of work is an understatement. Each cast member spent many hours on top of their busy after school schedules to perfect the broadway-level choreography. It seems that the students’ passion for theater and the family-like atmosphere that the directors created made the work seem more like fun.

The directors emphasized this group’s talent as much as possible by giving each Cat the spotlight that he or she deserved, as they do in the broadway production. Everything about the show exuded an effort to be exact. The set contained extreme precision, down to the run-down volkswagen in the corner of the stage, the “trash” scattered along the floor, and the perfectly painted full moon, to give a real visual of a Jellicle Cat’s natural habitat. The costume designers, Costume Holiday House, and makeup designer, Brian Strumwasser, also displayed their talents through each Cat. As they do in the broadway production, each student wore skin-tight bodysuits with accentuated stripe and color patterns unique to each cat, as well as extravagant wigs of different shapes and colors to show off each cat’s unique mane. Through multiple trials, each cat also found a full-face makeup look to fit his or her character’s personality. “In all the costume and makeup, I get to feel like a professional actor,” said Shaun Phillips.

After anxiously waiting to see the students perform, family and friends were welcomed by the opening number, “Jellicle Songs for Jellicle Cats,” performed by the cast in its entirety. The audience knew right away that the drama club did not take preparation for this performance lightly. Each song and dance was very clearly rehearsed to perfection. Highlights of the performance included the opening number performed by the whole cast and featuring the famous high C note mastered by Maia Penzer who played Jellylorum, which reccurs throughout the musical; “The Rum Tum Tugger,” performed by eighth grader Andrew Glick, who played The Rum Tum Tugger; and of course the song that can be credited as one of the most famous songs from any musical to this day, “Memory,” performed by Julia Davolio, playing Grizabella.

Being that this musical provides multiple lead roles, each Cat really had his or her own time to shine in this performance, which shows why the directors fought so hard to be able to take it on. Some of the most talented students in the Half Hollow Hills school district really had the chance to show off due to this production, which, thanks to Mr. Iconis, Ms. Regan, choreographer Chris Brick, and the rest of the drama club staff, was able to become not just a reality, but a fantastic broadway-quality show that exceeded everyone’s highest expectations. Needless to say, any school or drama club that can master an extremely challenging musical like “Cats” deserves recognition… because Jellicles can and Jellicles do!