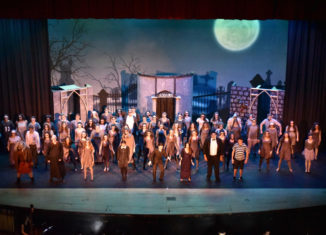 Full Disclosure: we did it again! Another unbelievable performance by everyone involved in the school musical. This year, the High School East Players presented The Addams Family musical on March 31st and April 1st. For those of you that didn’t see the show (although you should have), The Addams Family is a hilarious story about a strange, gruesome family who tries to be normal for a night to help their daughter impress the family of the boy she wants to marry. With “darkness and grief and unspeakable sorrow,” as well as craziness and love, the musical was a sensational hit both nights. This year was the largest audience we have ever seen in all of the High School East history!

Unsurprisingly, the cast was phenomenal. The principles were Aidan Mallon as Gomez Addams; Marley Jacobson as Morticia Addams; Dylan Haefling as Uncle Fester; Faith Quashie as Grandmama; Eden Tuckman as Wednesday Addams; Ben Keschner as Pugsley Addams; Sean Morris-Cammock as Lurch; Jeremy Erdheim as Col Mal Beineke; Ashley Gomerman as Alice Beineke; and Josh Meehan as Lucas Beineke. The wonderful dancers included 17 featured dancers, with Alyssa Schmidt and Amanda Stark as their dance captains and help from Haley Califano, Casey Goodman, and Priya Perez. Aside from the featured roles, there were also about 55 other students in the ensemble without whom the show would not have been as successful. Aidan Mallon says, “being involved in a production at Hills East is an indescribable experience of joy, love, and friendship, as well as a marvelous opportunity to pursue theatre in a serious way.”

Aside from the cast, the show couldn’t go on without the superb stage crew and the pit orchestra. Year after year, I am blown away by the sets for the shows. Crew, you guys are unbelievably talented and the cast could not do what we do without you, so thank you so much. Not every high school is as lucky as ours to have an experienced, talented, full pit orchestra. The music in our production is just as amazing as the music on the tracks of the original, professional cast recordings, and that is an extremely hard thing to accomplish. Jordan Simpson, senior percussionist in pit, says, “Participating in the pit is like having a front row seat, only we’re the ones playing the music. It’s a blast because there’s great music, and as the drummer, I have to keep the music going because what we do corresponds to what transpires on stage. It’s such a fun and amazing experience.”

The students, however, did not just become this talented and prepared on their own. We have seven people who make this show possible and teach us how to be the very best we can be. Thank you to our co-directors Lauren De Stefano and Danielle McRoy (Dr. McRoy is also the musical director), our orchestra conductor Monica Benstock, crew advisors Vikki and Torry Reres, costume coordinator Debbie Parker, choreographer Eliana K-Lichtman, and makeup designer Rayna Weil. You all are the true backbones of each and every production, and I speak on behalf of the whole cast, crew, and pit when I say we appreciate and are so grateful for everything you each do for us and the show. Without each of you, we would have no acting abilities, no singer, no music, no sets, and no costumes or makeup to make us look as fantastic and real as we did on stage. Thank you so much; we love you.

I am currently a junior, and this is my third year involved in the spring musicals. I can’t imagine school without “play season.” I look forward to the 4 months of rehearsing every year. The musical is an unbelievable experience for both my academic and social development. I met some of my best friends doing the musicals and also became a better singer and actress because of it. The bonds I have made while rehearsing everyday is something no one outside the production could possibly understand. The fact that I only have one more year left to do the musicals physically forms a pit in my stomach, and I cannot comprehend that it is almost over. Thank you to everyone involved in making this show a phenomenal success. Remember, Move Toward your Darkness always and Do what Addams do or DIE!