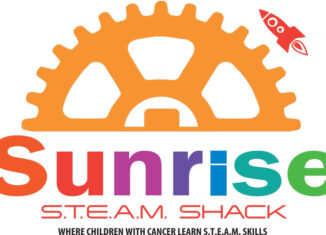 Sunrise Day Camp is a program with a mission to provide children with cancer and their siblings the experience of an amazing childhood. In 2006, Sunrise Day Camp was the first day camp of its kind in the world. Thousands of unfortunate kids are given many opportunities in the Year-Round Programs and In-Hospital Recreational Activities, which are offered free of charge and put into action due to millions of dollars raised for these programs. There are a total of 8 Sunrise Camps throughout the world, helping 15,000 children and families. Back in the summer of 2017, Max Miller, a former counselor at Sunrise, wanted to give back to his campers who wished that their camp had a technology facility. With the help from his father David, a program was launched. Sunrise Day Camp then launched a capital-donation campaign to support and further instigate Max’s plans for the new program. The campaign raised about $600,000 in cash and in donations from many sponsors. Finally, in the summer of 2019, Sunrise reached a new milestone when The Laura Rosenberg S.T.E.A.M. Shack finally opened. 3D Printing and design, robotics and engineering courses, and computer programming are offered in the 1,050 square foot facility dedicated to science, technology, engineering, art, and math. By having such an advanced program, the Shack can fill some educational gaps that are common among cancer patients as a result of valuable school time lost. This program was also intended for Sunrise to further embrace the interests and differences among every child. Whether a child doesn’t like sports or physically cannot participate in them under certain conditions, the Shack gives these children new opportunities. An average of 100 to 125 campers participate in S.T.E.A.M. Shack activities per day, providing them with opportunities to learn valuable skills. Kano, an English-based company, has provided the computers for the new facility. With these computers, kids have the opportunity to learn to code and even build their own computers. Campers can even design and 3D print their own gadgets and play with robots that they made themselves. The Sunrise S.T.E.A.M. Shack has hopes to expand to other camps around the world as well as Sunrise on Wheels, which is a program that brings camp to children in the hospital and outpatient clinics. From this program, an online community will be created where children can “learn, share, play and connect” with others just like them. This amazing program is changing these kids’ lives day by day. The new S.T.E.A.M. Shack is giving children opportunities that build their futures beyond cancer.