You are here
Home > World News > Justice for Hong Kong 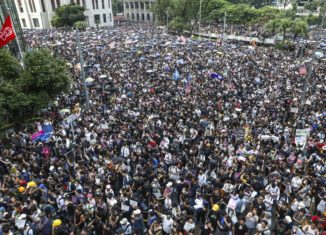 Starting in March of 2019, millions of citizens of Hong Kong have been flooding the streets all with one unified goal in mind: withdrawing amendments to an extradition bill proposed by the Chinese government. These amendments, if passed, will allow a person arrested in Hong Kong to face trial outside of Hong Kong – including mainland China. Passage of the amendments would allow the Chinese government to target individuals who have been accused of crimes now, in the future, and even in the past, to face trial on the mainland. Currently, Hong Kong is considered a “semi-autonomous chinese city-state.” After Great Britain took control of Hong Kong in the 1800s, it was returned to China in 1997 under the condition that the city could partly govern itself until 2047. Though this deal is in place, the powerful communist Chinese government has increasingly brought the people of Hong Kong under its power long before the deal is set to expire. Hong Kong has generally been able to make its own political decisions with little interference from the Chinese government, but protestors believe that these amendments will enable the Chinese government to assert their authority over Hong Kong. These massive protests feature over a million protestors, who have been peacefully standing up for their rights. The protests have only recently become violent due to clashes with police. Officers have released tear gas and rubber bullets against the demonstrators. Hong Kong civilians are demanding that these acts of brutality among their peaceful protests stop. Some protest leaders have been taken into custody, which exemplifies an authoritarian act the protestors are fighting against. If the protests fail to stop the amendments, it is feared that Hong Kong will just become another Chinese city. Mainland China is ruled by a communist party, and its practices and beliefs differ from the government style being administered in Hong Kong.

Currently, the United States has not done anything significant to assist in the riots. The White House advisors are increasingly becoming alarmed and are watching closely in fear that it can spiral out of control. The President himself has not spoken of taking any action, but he has wished peace and safety among the protestors.

It is important as American citizens that we stay updated and informed on big world events like this taking place. Living during the time of this event holds every individual responsible for being aware. If everyone can learn and even take action, together, not only our country, but our globe can prosper as one. As this event is still continuing, we must hope that Hong Kong eventually receives justice.