You are here
Home > Op/Ed > PINK IS THE NEW POWER COLOR: The Women’s March Across America 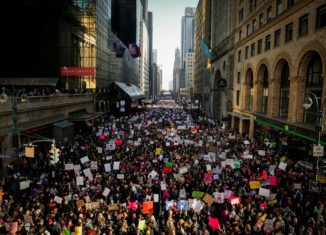 By Carina A. Boyce

On a sunny Saturday morning, January 21st, 2017 to be exact, something of a revolution began to sweep the country. By the end of the day, millions of people would march in their respective colleges, villages, towns, and cities, in what was billed as “The Women’s March.” Having never been to a political march before, my sibling and I set out with our mother to venture into the New York City March. As we rode the Long Island Railroad, more and more women of all ages began to board the train leaving a trail of pink hats and provocative signs from Hicksville to New York City. Penn Station was bustling as always, but by the time we got to Grand Central Station, the subways and the streets were completely filled with people; the largest number of people I had ever witnessed in one place took to the streets. In total, more than a reported 400,000 people would march in New York City alone that day. Other large marches included over 470,000 in Washington, D.C. during their peak, and hundreds of thousands in both Los Angeles and Boston – the other major anchor cities for marches. However, millions and millions more were also marching in every state in the nation, and in most continents worldwide, some marched hours before we did because their time zones differed. As a result, this was a full 24 hours of women around the world marching for their rights and demanding their voices be heard.

Marches had initially begun as a way for women (initially) to vent their frustrations about the results of the November 2016 Presidential elections, and to voice early concerns for what they feared could become an insensitivity to women’s issues under our newest and 45th President of the United States – Donald J. Trump.  Organizers believed that their fears rationally arose largely out of several of President Trump’s campaign comments that they believed posed a risk to some of the gains in women’s rights over the years. Many of these issues revolved around things like equal pay for women and reproductive rights, but extended to what they felt were human rights issues on subjects like immigration and trans-gender policies.

What is the mission behind the Women’s March in NYC and elsewhere?

The Women’s March states its purpose as one “To provide a safe and accepting platform for supporters of equality to rally and march in promotion of civil rights for every human regardless of gender, race, sexual orientation, ethnicity, disability, religion or creed”.  They stated that they also “hope to send a positive message to the local, domestic, and international community that the administration’s job is to report to the people who elected them.”

And so it was, on that sunny day in January, two months after election day and within 24 hours of the newly elected 45th President of the United States taking office,  my family and I joined an estimated 400,000 people marching through the streets of New York City. Not much of a political rebel before this, I really wasn’t sure what I might feel once I got there. The crowds made me nervous but the sea of people in pink hats seemed like a unified chorus and it fascinated me. I began reading the range of posters as I munched on a free pink cupcake made specially for the occasion by organizers. The posters ranged from political, to funny, to unprintable. I watched as a two-year old skipped happily as she held her “Future Woman Voter” sign, and as grandmothers held “Nasty Woman” signs that channeled the presidential debate in which the current President call the leading Democratic candidate – Hillary Rodham Clinton – a “nasty woman”.  I stared uncomfortably at a man in a wheelchair with a portable oxygen tank and a huge sign that said Obamacare had kept him alive, and I wondered what my own sign would’ve said if I had made one.

Somewhere in the crowded organized chaos that was the Women’s March in NYC, the orderly intentions and fears of the people in the march began to become clearer to me. It felt like some people were genuinely scared of what the 45th presidency might bring. There were those who seemed to believe that they had everything to lose and was unsure that the newest administration would care about their needs going forward. Some marched against something – like the new President, his past rhetoric or what they suspect would be his future policies. Some marched for something – women being heard, girls being empowered to shatter glass ceilings and receive equal pay, healthcare services being available, or young undocumented immigrants being given a pathway to residency or citizenship. They all felt impassioned to make their voices heard … and it was, as hundreds of thousands of both women and men loudly chanted phrases like “This is what Democracy looks like!” If true, democracy that day included every race, every age, every gender, every nationality, every religion and a range of political beliefs.

It was clear that the elimination of the Affordable Care Act, also known as “Obamacare”, was a huge threat to many of the marchers – both the sick and the healthy. However, I began wondering as well about other signs pointing to a huge list of women’s, civil and human rights that seemed to be at risk. I could not help also wondering about those who did not agree with this March and had retained full faith and confidence in this new President. Then I wondered how many of the marchers had actually voted, having squeezed into the booth with my own parents months earlier as they casted their votes. I wondered, did you get more upset if you voted and lost or if you didn’t vote expecting a certain outcome that didn’t happen? Whatever their motivation, the crowd was passionate and civic engagement was everywhere.

Marching is as Old as Our Nation

It was an amazing experience to be part of history being made as it was clear from the inside that it was being made. Later the evening, I stared at marches across the nation and world and the movement felt overwhelmingly bigger than I was. The confusion I entered the March with was replaced by clarity as I left. People marched for many reasons … none of them bad. Their right to protest, right to engage elected officials, right to fight for gender equality, civil rights or human rights, was as old as the nation. Had some not marched, women would still not be able to vote. Had some not marched, African Americans might still be enslaved or be drinking from “colored” fountains. Had some not march, blacks would still not be allowed to vote. I can honestly say that each of us is allowed to march for what we value, and by the time the twilight hours forced and end to the march one block from Trump Tower on Fifth Avenue in NYC, I, too, felt a heightened awareness of the issues that bothered me most. Protesters had came together for so many different reasons but none any less important than the next. I myself found it rather powerful how such a huge and diverse portion of our nation was able to come together as a unified voice in this March after being so heavily divided during this election. Yes, this is what Democracy looks like!