You are here
Home > Op/Ed > Semester of Covid 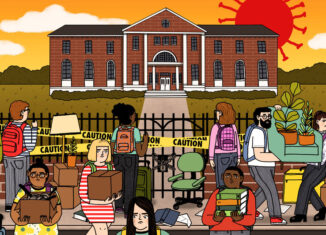 Although many colleges and universities around the nation have taken Covid-19 very seriously, the precautions they have taken may not be enough to stop an outbreak. As students prepared to get back to college, many schools required testing before arriving on campus or plan on testing several times throughout the semester. Even though schools have done this, there are already universities, including The University of North Carolina, that have sent all students home due to the number of students testing positive for Covid-19. There are also schools that have decided not to even open dorms for the semester, one of which is Ithaca College in upstate NY.

As the numbers of positive cases increase through campuses of colleges and universities, a difficult decision has to be made on how to handle the situation. Some schools have decided to send all students home, while others have found ways that they believe will limit the spread.  Even though many schools tested the students before entering the campus, the issue being faced now is that the numbers are rising after the students moved into their dorms. One of the schools facing this issue is Tulane University. According to the Health and Safety Notice sent out by the university, before moving students into dorms, there was a .68 percent positive testing rate. Less than two weeks later, the positive testing rate has increased to 2.9 percent. While Tulane is not the only college experiencing this issue, this data indicates that even though many colleges tested their students before entering campus, it did not stop the positive testing rate from increasing. As colleges and universities do their best to manage the spread of Covid-19, it is proving to be difficult to completely eliminate the virus from their campuses.