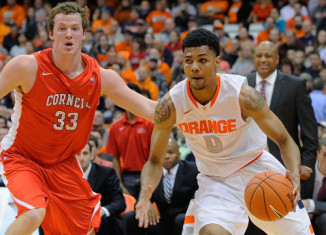 The 2015-16 college basketball season has begun, and so far, it has been extremely chaotic. Unlike most years, many of the top tier teams in college basketball, such as Kentucky and North Carolina, have had to fight to get by their much weaker opponents. In addition, there is no true dominant team in college basketball this year when compared to last year where Kentucky went undefeated through the entire regular season. The season is only a few weeks in, but many teams have already surprised and many teams have already flopped.

Syracuse– Syracuse started off the season unranked, but has quickly proven that they are back to being one of the dominant programs in college basketball. Syracuse went to the Bahamas for the Battle 4 Atlantis with low expectations due to the field that consisted of three ranked teams in Gonzaga, Connecticut, and Texas A&M, as well as Michigan, Washington, and Texas. However, the Orange looked like the best team at the tournament taking down Connecticut and Texas A&M en route to securing a tournament win. Syracuse found their identity in the Bahamas, shooting 45% from the three-point range and constantly pushing the ball. Michael Gbinije, Syracuse point guard, looked like the most improved player in the country in the tournament where he averaged 19.5 and took home the tournament MVP award. Along with Gbinije, Tyler Lydon and Malachi Richardson have stepped into large roles and exceeded expectations. This team could be extremely dangerous come March.

Michigan State– Michigan State was supposed to be good, but no one expected them to be this good. At the start of the season, the Spartans were ranked #13 and quickly showed why they deserved to be much higher. In their third game of the season, Michigan State defeated Kansas at the Champions Classic in Chicago. In that game, Denzel Valentine, Michigan State’s point guard, looked like a frontrunner for National Player of The Year. Valentine had a triple-double with 29 points, 12 assists, and 12 rebounds. Michigan State is a very experienced team, however the X-factor for this team will be the development of freshmen Deyonta Davis and Matt Mcquaid. The Spartans have the experience and talent to continue their hot start throughout the season.

Indiana– The Hoosiers are loaded with talent as usual, but they look like they may underachieve yet again. The Hoosiers went to the Maui Invitational with high expectations of being able to bring home the trophy, but this year’s Hoosiers did not look like a team capable of achieving that goal. In their first game, they lost to Wake Forest who was without their best player. Then, the Hoosiers lost to a UNLV team that is in a rebuilding year. Indiana’s only victory in Maui was over St. John’s who lost to a D-II team by twenty earlier this year.

Wisconsin– Wisconsin had extremely high expectations coming into the season after they reached the Final Four in back-to-back seasons. However, on opening night, the Badgers lost to Western Illinois at home and then got destroyed by Oklahoma. To cap off this poor start, Wisconsin lost to Milwaukee at home. If the Badgers want to turn things around, they need to get it together as soon as possible.