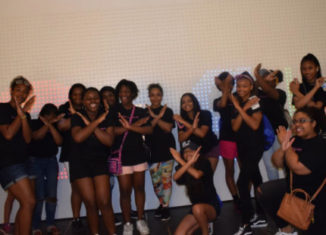 For two weeks in July, the Half Hollow Hills High School East XX Coders Club held a coding summer camp in Wyandanch that introduced computer science to a group of 22 young women. The campers learned how to code in Scratch, JavaScript, Java, and Python, and they were taught ways that computer science can be applied in their daily lives, as well as how programming can change the world.  Guest speakers from Long Island Women in Tech and Girls, Inc. visited and addressed the campers, offering them insight to the female perspective and experience in the technology industry. The camp ended with a field trip to visit the Google headquarters in New York City, where a panel of Google employees answered questions from the group and showed them a day in the life of a coder.

As founder and president of XX Coders, I have known since I was a freshman that there is a large disparity between men and women in the technology field. Even I used to think that learning to code was boring until I accidentally stumbled on it in a high school elective here at High School East: Introduction to Java. After becoming immersed in the wonders of computer science, I decided to bring coding to girls at East through XX Coders, a club where girls are not just peers, but also each other’s support to help them thrive in the computer science world. The girls in the club work on fun activities through Google CS First and Code Academy in order to learn Scratch, HTML, CSS, and a multitude of other computer languages.

Women are underrepresented in the field of computer engineering, and I founded this club to help make high school girls feel more prepared to take college level computer science courses and to battle the misconception that coding is a boy’s job. XX Coders hopes that experiences like those had at this summer camp help empower young women to continue to explore their love for computer science and to become future creators of technology. The success of the camp proved that girls actually do love computer science when given the opportunity. All 22 girls wish to return in the fall when XX Coders will continue once again in the Wyandanch Family Life Center.

In addition to offering a summer camp, the club also partners with the district’s Special Education Parent Teacher Association to work one-on-one with children on the autism spectrum to teach them about computer science. XX Coders is an after school club for girls at HSE that meets every Tuesday in room 743.