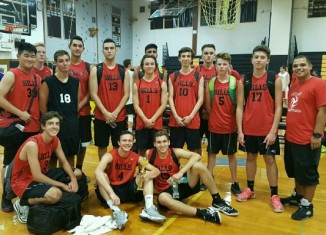 After a disappointing season last year for the Hills boys volleyball team who finished 8-9 and missed out on the playoffs for the first time in 4 years, a regime change was put into effect. This year the team has a new head coach in Adam Rodriguez. Coach Rodriguez is no stranger to the game; he’s been associated with the game throughout his whole life. He was a player, a coach, and even a referee. So far this season, morale has been through the roof. Coach Rodriguez’s expectations are high for this year’s team. He believes that the potential for this team is astronomical and that not only making playoffs, but winning in the playoffs is the long term season goal. Coach says that he is most excited for the team’s matchup against Sachem North, his alma mater. He says he is not excited because it is his alma mater, but because they are Long Island Champions, as well as New York State champions, and he believes that in order to be the best you have to beat the best. This year’s team is led by captains Jeremy Manchenko (Junior) and Jake Hanzel (Senior). Hanzel has been on Varsity since his sophomore year and earned the starting job last season as a junior. Hanzel said that “this year’s team has already put last season behind them and is focusing on the future. This team has loads of potential and we believe that as a team we can go far in the playoffs if we put in the work.” On the other hand, Manchenko has been a starter on the Varsity team since his freshman year. Manchenko also believes that getting back into playoffs is the goal for this season. Even though this year’s team is led by Manchenko and Hanzel, the team will also lean on other talented players, including Tom Dominic (Senior), Andrew Milano (Senior), Zach Schwartz (Senior), and Jake Garziano (Senior). Besides these seniors there are budding younger players with a ton of talent who will look to make an impact when given the opportunities. The overall feedback from the players is that they believe in Coach Rodriguez, and they say that he knows what he’s doing. The outlook for this year’s team is looking up, and the players themselves know it. This season is going to be one to keep an eye on.