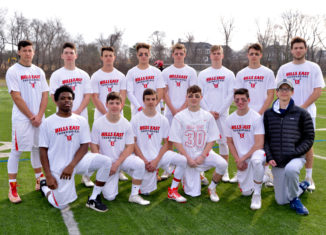 The life of a lacrosse player, like many of their fellow student athletes, is hard and extremely demanding. This year’s Varsity Lacrosse season was one that involved teamwork, hard work, and skill. Most games this season saw record crowd turnouts, with the stands packed and for good reason; this year’s team was often referred to as  “stacked.”

The players are one thing, but a great army is nothing without a great general, similar to how the team would be nothing without a great coaching staff and captain.Coach Hodgson and Coach Conway are the very best and teach their players how to be exemplary leaders on and off the field. Both coaches noted how this was one of the best seasons they have had in years, and they are very proud of their players. Captain Sean Lulley, who will be attending the University of Pennsylvania and playing collegiate Lacrosse next year, said, “Overall the season has been a great run. We have a lot of great players, and we all play really well together. Being a captain for this team is a huge honor, and we are lucky to have had the chance to play in a tough semi-final playoff game against Ward Melville on May 25th.” With a record overall of 14-4, the Boys Varsity Lacrosse team suffered a tough loss in the semi-finals to No.1 seed Ward Melville. The Thunderbirds got two goals and an assist from Sean Lulley, one of Long Island’s leading scorers with roughly 90 points for the season. Goalie Kyle Bockelman was sharp the entire season and deserves to be recognized as well. He has a great eye for the ball and was a key component in winning most games throughout the season.

Lulley further commented, “I think what makes this season particularly special is how close all of the guys are off the field. We are all really good friends and enjoy hanging out with each other. We are family. This is the type of group that is going to stay in contact for the next 20 years. I love the team, and it has been a true honor to be a part of something so great.” The team had a great run and will truly miss all of the graduating seniors. The seniors that should be recognized for their hard work the past few years are: Sean Lulley, Kyle Bockelman, Atosh Czarzasty, Dillion Studdert, Anthony Cappadona, Cole Montalvo, Chris Truncellito, Noah Dooley, Dan Coyle, Reed Bresky, Nick Volpe, Chase Labarbera, Arti Babcock, and Tyler Parkinson. On behalf of the Thunderbird, best of luck to all of the graduating seniors. We can’t wait to see what the lacrosse team has in store for next season. Go T-BIRDS!