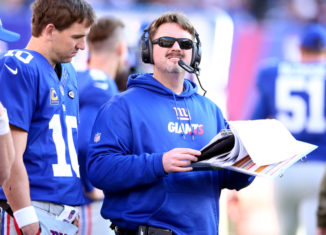 The sports world has gone into a frenzy upon hearing that New York Giants head coach Ben McAdoo has decided to bench superstar Eli Manning. Manning has won two Super Bowls for the Giants (2008, 2012), and up until now, he has started in 210 consecutive games. Eli has been with the Giants for over 10 years, and in each year, he never quit on his team and always putting in the extra effort. However, this year, his team quit on him. The New York Giants have an abysmal 2-9 record this season and have lost key wide receivers Odell Beckham Jr. and Brandon Marshall to season-ending injuries. The Giants looked as if they could be potential Super Bowl favorites this year during the preseason, as their offense and defense have drastically improved. Now the Giants would be lucky if they could beat the San Francisco 49ers. The offensive line has been the team’s achilles heel, and coach Ben McAdoo is taking all the heat for his team’s lackluster performances. The last couple of weeks have been hard for McAdoo as there have been rumors about his potential firing. Unfortunately, McAdoo benching Eli has not helped his cause at all. McAdoo has taken a huge risk in his decision as the starting quarterback will now be Geno Smith. In fact, McAdoo has since been fired as the Giants have decided to go in a different direction. Not only are New Yorkers outraged with the actions against Manning, but other QBs like Philip Rivers have noted the disrespect that Eli Manning is receiving despite all that he has done for the Giants organization.

The blame can’t all be put on Eli either. With almost no one to throw to and a porous offensive line, there is little Eli can do to move the ball down the field. However, McAdoo gave a valid reason as to why he decided to bench Eli. McAdoo explained that he wanted to give Geno Smith and Davis Webb a chance to showcase their skills on the field. After all, the Giants have nothing to lose with no shot at making the playoffs this season. McAdoo also offered Eli the chance to start in week thirteen; however, Eli declined the offer, and Geno Smith was announced the starter.

McAdoo is looking to the future. He wants to find a quarterback who can fill the role of Eli Manning when he retires. However, McAdoo is failing to realize what he has now. He has a potential Hall of Fame quarterback who has led the New York Giants to two Super Bowls. Thus, the outrage that McAdoo has received from fans and players around the league is certainly warranted.