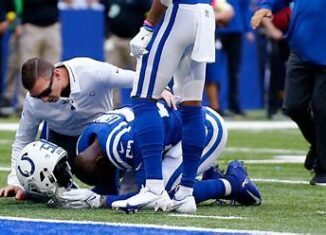 In today’s world of sports, the main concern about signing kids up to play at a young age or even those who are older and qualified to play hard-hitting contact sports are worried about getting injured. In football, the most common injury is a concussion. A concussion is caused by two players running into each other and colliding heads. The real question raised from this is if football helmets are really used as protection or are they used as weapons?

Most sports played around the world come with consequences, in simpler terms, injuries. The sport with the most injuries is football. Football is a very strenuous sport with many consequential injuries. Football players put loads of stress on their body to perform at the highest level. New protective technology is introduced to football every year, but the same injuries keep occuring. As two football players collide and attempt to hit each other, the players giving out the hits are more protected than the ones being hit and targeted. Nearly every year in the NFL, athletic trainers and teams have reported over 100 concussions. Not only are concussions a major risk, but these seem minor compared to death. On average across all levels of football from pop-warner to the NFL, there have been a reported 5 deaths per year on average.

As a result of many head and neck injuries in the NFL due to players using their protection as weapons, Commissioner Roger Goodell spoke out against the events occurring. Goodell is all for the use of helmets in the NFL to be used as protection, Goodell states “Our focus is how to take the head out of the game and make sure that we’re using the helmet as protection, and it’s not being used as a weapon” (NFL.com). Starting in the offseason of 2018, if players on the offensive side of the ball lower their helmets and lead with the crown of their helmet on the face mask, this will result in a 15-yard penalty. There may also be a disqualification added to the player depending on the damage done.