You are here
Home > Sports > Why is baseball in a lockout? 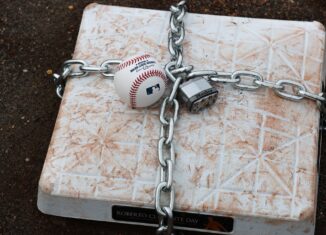 The future of baseball is in shambles. Major League Baseball is currently in a lockout. This lockout is due to a labor dispute between MLB’s players association and its owners. The previous collective bargaining agreement expired, and they are in the process of agreeing on a new one. Both sides, the players and its owners are very keen on getting an ideal situation for their side. They’ve had multiple months to negotiate, but they hadn’t started negotiating until it was too late and regular season games were in jeopardy.  Major League Baseball has already started canceling games from the 2022 regular season. That being said, they could find a way to make up those games if a deal gets agreed to soon. The confusing thing about this whole ordeal is that they don’t need a collective bargaining agreement to play. But, the owners decided to lock out the players trying to learn from mistakes made through history. In 1994, Major League Baseball tried to play without a collective bargaining agreement and it resulted in a mid-season player’s strike and the World Series being canceled.

The real losers in this situation are the fans, they are losing out on more baseball. Normally the MLB season is 162 games, there was already another shortened season back in 2020. In 2020, the MLB season was 60 games. But, they were awfully close to missing that entire season. Among other things in 2020, there was a dispute over the percentage of money players would receive. They couldn’t agree in 2020 and MLB Commissioner Rob Manfred essentially had to force the season to happen. After 2020, it became evident that baseball was in danger for 2022.

There are a few differences between this labor dispute than any other labor dispute. The amount of money that is being argued over is ridiculously unfathomable to the normal American. Another difference is the publicity on these negotiations, the notoriety of major league baseball has caused this specific dispute to become massive news. Seeing this dispute has started to anger fans, baseball isn’t going to be played and it’s over an amount of money that they can’t even imagine having.  Obviously, the main reason for this discourse is money. The players are trying to not “get burned” by another one of these collective bargaining agreements. The MLBPA is mainly seeking increased minimum salaries and an increased percentage of the money Major League Baseball makes. They are using inflation as a justification for their wants. Their impediment is Rob Manfred and thirty billionaire owners. It’s extremely difficult to tell a group of billions “We want more of your money”. It has become evident that the owners don’t care enough about the sport of baseball. They said just last week that they were willing to cancel the first month of the season. They said that because April is the least profitable month of the season and the owners end up losing money during April. That being said, the owners’ negotiation chip has been that they lost a lot of money over the past two years. Using that as an excuse to not give the players an increased piece of the pie. Seemingly, the lockout will end once the two sides agree on the luxury tax and the minimum salary.

Even though there hasn’t been much agreement between the MLBPA and the owners, there were some changes that have been agreed upon. First of all, baseball will have a universal designated hitter. As well, they’ve agreed to implement a draft lottery and increase the size of the bases. Both sides have also agreed to ban the defensive shift and eliminate draft pick compensation. However, the proposal to implement robotic umpires was rejected. Another issue at hand at hand is the playoff format. The current playoff format has ten teams (five from each league), the number of teams will definitely be increased. But the two sides have yet to agree on whether the playoffs will include 12 or 14 teams. It is unclear how close a deal is to getting done, it could happen today and it could happen in 10 months. There is one thing that is certain, baseball fans miss baseball.