You are here
Home > Sports > Who Will Be the NFL MVP? 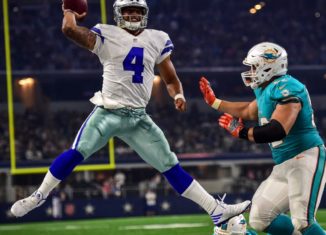 As the regular season ends, many players are making their case to be the MVP of the National Football League. As of now, the top five players leading the race are: Derek Carr, Matt Ryan, Dak Prescott, Tom Brady, and Ezekiel Elliott.

Derek Carr, prior to his injury, lead to the raiders to a top 11-3 record while putting up elite numbers with twenty eight touchdowns and only six interceptions. The Raiders 0-2 record after the injury shows just how valuable he is and will be to the raiders in the future, proving him to be a candidate for MVP.

Matt Ryan was always an elite quarterback, but he is now showing just how valuable he is with the numbers he is putting up this year. Matt Ryan leads the league in passer rating, yards per pass play, and touchdown to interception differential, all making him a top quarterback and candidate for MVP.

Dak Prescott has been on a roll. Ever since his first career start, the rookie has led the Cowboys to a franchise best 13-3 record, as well as the longest winning streak in franchise history at 11 games. His consistent play has landed him a heavy favorite towards being chosen as MVP.

Ever since coming back from a four game suspension, Tom Brady has been on a tear putting up big numbers against every defense he has faced, including 28 touchdowns and throwing only two interceptions in just 12 games. It’s hard to imagine a season in which Tom Brady hasn’t put up great numbers, but this year is different, earning him the right to be a candidate for MVP.

Lastly, Cowboys rookie Ezekiel Elliott, playing alongside Dak Prescott, has been dominant since his first game, leading the NFL in rushing yards at 1,631. He has been doing it all and leading the league in about 5.1 yards per carry. His numbers reflect the Cowboys success and record this year, making him, in my opinion, the favorite to win both Rookie of the Year and MVP.