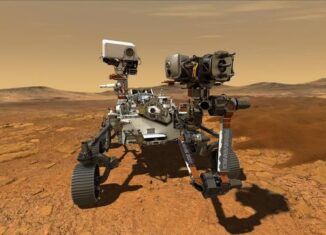 On April 20th, NASA’s Perseverance Rover made another significant discovery on Mars, once again helping pave the way for astronauts to soon explore the planet. The rover made breathable oxygen for the first time on the Martian atmosphere of Mars, which consists of about 95% carbon dioxide and 5% nitrogen and argon. Because bringing an abundant supply of oxygen from Earth would be impractical, this success is vital for humans’ long term stay on Mars.

The rover used an instrument called MOXIE (short for “Mars Oxygen In-Situ Resource Utilization Experiment”) to generate oxygen from the thin, carbon dioxide-dominated Mars atmosphere. It’s a toaster-sized device that uses a method called solid oxide electrolysis to turn carbon dioxide into oxygen. A filter draws Martian air into the device, and a mechanical pump compresses it to Earth-like pressures, sending carbon dioxide to the electrolysis system. The carbon dioxide is heated to a temperature of about 800 degrees Celsius. MOXIE is made of heat tolerant materials because the conversion process occurs at such high temperatures. It contains a thin gold coating to suppress the heat and keep it from radiating outwards and damaging the rover. MOXIE then isolates the oxygen to a separate chamber, where the oxygen ions recombine. Carbon monoxide is released as a waste product, and all that is left is oxygen. According to early findings, the resulting gas is almost pure oxygen. It produced 5.4 grams of pure oxygen, which NASA officials said was about enough for an astronaut to breathe for 10 minutes. Engineers hope that MOXIE will one day be able to produce enough oxygen to accomplish future human missions to Mars. The NASA team plans to run about 9 more trials over the course of one Mars year, which is equivalent to 687 Earth days.

While oxygen is crucial for astronauts to live and breathe on Mars, it is also a critical rocket fuel component. Since the Martian atmosphere is 95% carbon dioxide, there is a sufficient supply of oxygen; all we need is the right technology to produce it. Currently, MOXIE will not be able to meet those requirements, but it will pave the way for larger conversion instruments.