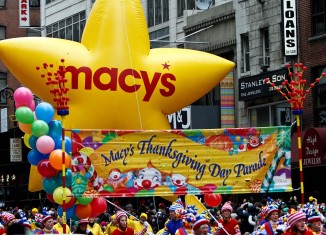 On the third Thursday of November, millions of Americans gather each year around their television screens or on the streets of New York City to watch the annual Macy’s Thanksgiving Day Parade. This 89 year old tradition was filled with the classics that we have all come to know and love, along with some modern flare. There were 41 balloons, 27 floats, 1,100 cheerleaders and dancers, and more than 1,000 clowns. The Macy’s holiday mascot, Snoopy, made his annual appearance, and the parade entered with the arrival of Santa Claus, signifying the unofficial kick-off of the holiday season. Some of this year’s new balloons included a red Angry Bird from the popular app and game, Ice Age’s Scrat and his well-known acorn, along with the Sinclair Oil Dinosaur. There were also many new floats, including Build-A-Bear Workshop, Snoopy’s Doghouse, and Avocados from Mexico. As always, musical performers donned the floats; this year, some of the performers were Train, Shawn Mendes, Trey Songz, and Andy Grammer.

As always, the parade also showcased many marching bands and performance groups from across the country. Wiz Live!, a new Broadway Show, gave an exciting preview performance, while several other Broadway favorites gave a taste of their magic in front of the iconic Macy’s department store in Herald Square. As the parade came to an end, many televisions across the country switched to football games and spectators began their journey out of NYC, but the joy of the Macy’s Thanksgiving Day Parade remained with its viewers all day long.