You are here
Home > World News > An Update on the East 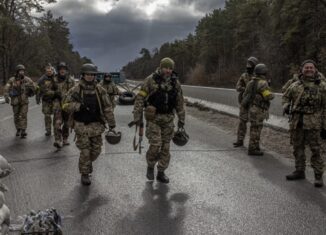 Ukraine and Russia are two nations that border one another in Eastern Europe. On February 24, 2022, Russia invaded Ukraine, beginning to take over the nation forcefully.

The relationship between these nations traces back to 1,300 years ago, with both nations deriving from the same medieval kingdom, Kyivan Rus, founded by a group of Vikings in the 800s. The capital of this empire was Kyiv, the present-day capital of Ukraine. Moscow, Russia’s capital, was also a part of Kyivan Rus. In the 1500s, descendants of Kyivan Rus’ princes in Moscow formed imperial Russia following the Mongol invasion of the empire.

During the Russian Revolution in 1917, the Soviet Union was created in Russia, which included Ukraine. Despite this creation of the Soviet Union, some Ukranians did not want to join this new empire, attempting to form their own nation. The Ukranians were defeated and the Soviets created the Ukrainian Soviet Socialist Republic, eliminating the power of the Ukranians. However, after the Soviet collapse in 1991, Ukraine and Russia became independent nations.

Now, fast forward to the 2000s, where Russia, particularly its leader President Vladimir Putin, is increasingly concerned that Ukraine would join the North Atlantic Treaty Organization (NATO), a military alliance with the United States and other European nations, making Europe a threat to Russia. In 2014, Putin even went as far as to take over Crimea, an area in southern Ukraine, to try to avoid this joining between Ukraine and Russia.

Still, Putin argues that Russia and Ukraine are one people due to their extensive history as what Putin describes as brother nations, with Russia being the older brother, and therefore having to be in charge. As a result of Putin’s clear interests in Ukraine and the Ukranians desire for peace, but determination for independence, Putin invaded Ukraine.

The situation now in Ukraine is continuously evolving. The most current update at this time, released on March 8, 2022, informs the public that in Ukraine, a convoy of civilians has been evacuated from the besieged northeastern city of Sumy, but renewed Russian shelling forced the effort to be halting. Combat went on around the town of Izyum, eastern Ukraine, and the port city of Mykolaiv, the gateway to Odessa. In the thirteen days since the war began, the United Nations’ refugee agency states that two million individuals have fled Ukraine. In Russia, many non-Russians living in Russia have rushed to leave the country for a multitude of reasons.

The West, including President Biden, is currently responding to this issue by issuing sanctions on Russia. Biden said the U.S. would ban Russian oil and natural-gas imports into the U.S., directly targeting the lifeblood of Moscow’s economy. Poland said it would make its MiG-29 combat jets available to the U.S. after days of talks about how to get such planes into the hands of Ukraine. In the current situation, western nations will not send troops into Ukraine, but instead provide them with supplies to fight against Russia, preserving their independence.

Even businesses have responded to the growing issue between Russia and Ukraine, such as PepsiCo, McDonald’s, and Starbucks. PepsiCo is currently exploring options for its business in Russia, including writing off the value of the unit. McDonald’s has temporarily closed its roughly 850 restaurants in the nation, and Starbucks has suspended all business activity in Russia, including the shipment of all Starbucks products.

The situation between Russia and Ukraine is continuously evolving. There have been three peace talks between the nations, each only resulting in mild changes, and not progressing towards actual peace between the two neighbors. As the situation continues to develop, it is important to remain informed on the most recent condition of Ukraine and Russia’s relationship.