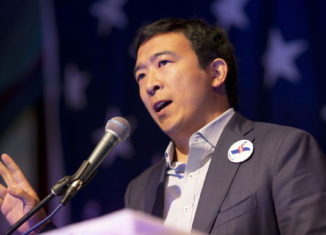 As the 2020 presidential election is slowly approaching, new Democratic candidates are changing the way we view the nation, and Andrew Yang is one of them. Andrew Yang has told many Americans what they do not want to hear, which is that soon, most US jobs will be eliminated by artificial intelligence. Even though Andrew is only 44 years old, he has many ideas upon which he plans to take action. Robots have already destroyed more than 4 million US jobs, and the numbers will only increase over time, but Yang has an idea of how to fix this. To save humanity from itself, he has come up with a plan for UBI, or universal basic income, also known as the Freedom Dividend. For every American adult over the age of 18, they will receive $1,000 every month for the rest of their lives. It might sound ridiculous at first; where will that money come from? He says that the money will be paid for by a new tax put on large companies gaining the most money from automation. Companies like Amazon pay little to no money for federal taxes, despite Amazon’s annual gross profit for 2019 of $104.017 billion. However, the Freedom Dividend is only one out of the three most important policies for Yang.

Medicare for everyone and human-centered capitalism are also his main goals. He ensures all Americans will get the healthcare they deserve. This will raise the quality of life for people and decrease the overall cost of treatment. Right now, we have a sketchy, private healthcare system, which leaves millions without insurance and bankrupts some with it. Our cost of healthcare is also higher than any other industrialized country, even though our nation does not even provide care for all of its citizens. With the Medicare for All system, costs can be controlled directly by limiting prices for medical help. Doctors are becoming more and more involved with their patients and treating them with holistic approaches. This could astronomically increase the quality of life for Ameican citizens, increase life expectancy, and help treat a wider variety of issues. Andrew Yang’s other major policy is human capitalism. Human capitalism focuses more on expanding human well-being and fulfillment. The sections of human capitalism suggest that humans are more important than money, that the unit is each person (not each dollar), and that markets exist to serve people’s common goals and values. His main goal of America’s economy is to maximize human welfare for all.

Economy and jobs, environment, democracy, criminal justice reform, education, social cohesion, foreign policy, and immigration are also important elements of the US that Yang believes in. It is also noted that Andrew Yang is not a politician, but an entrepreneur and businessman, so he knows what goes on behind the business side of things. After attending and graduating from law school, he built Manhattan GMA into an $11 million business and founded Venture for America, which trains graduated college students who are interested in working for startups and learning entrepreneurial skills. This is just one of the many reasons why Yang appeals to young millenials. He is also technologically savvy and knows how to connect with young adults through social media. Studies show that millenials and the Hispanic and Asian groups are most likely to vote for Yang. If he wins the election, he would be the first Asian-American president.

Although he is not as well-known as other candidates, he has never done anything insanely wild or questionable. Yang’s chances of winning the presidential election are smaller than some other candidates because of his experience in the field of politics. Biden, Sanders, and Warren, for example, have been politicians for many years and understand the process of how the government really works, experience that Yang does not have. However, polls have suggested that Yang has already won the democratic nomination because of his sudden increase in votes. Overall, Andrew Yang has brought many fresh ideas to the platform and changed how people view the business and economic side of politics. Tuesday, November 3, 2020, is the day that the next presidential election will be held. Even if he does not win, he has already shared his new and different opinions for putting humanity first, and people are listening.