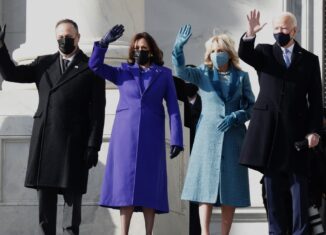 January 20th, 2021 was the first day of a new chapter in history. Like every 4 years, on this day, a transition of power occurred as Joe Biden and Kamala Harris were sworn in as President and Vice President of the United States. This day contained many historical firsts and changes. It was the first time a woman of African American and South Asian heritage was elected Vice President, it featured the youngest poet to ever perform at an inauguration, and it was only attended by a very limited number of people due to security threats that emerged after the January 6th attack on the Capitol coupled with concerns about the Covid-19 pandemic. Compared to past inaugurations, this one featured a theme of diversity and bringing citizens together regardless of race, religion, ethnicity, or political affiliation. Regardless of one’s political views, this day was important as the policies of a new administration will directly affect the lives of all Americans.

Joe Biden delivered a powerful speech that was truly the defining part of the inauguration. In his speech, one clear theme was the idea of unity. Throughout the speech, he used collective words that emphasized the unity of government, citizens, and democracy. Citing the first words of the preamble to the Constitution, Biden linked the foundations of America to the strength of our union. The president made references to the revered President Lincoln even more than many other presidents have in their inaugural addresses, comparing their souls and their connection to the nation. During this time that he calls an “uncivil war,” the president felt it was best to summon a figure like Lincoln.  Biden used the word “story” ten times throughout his speech. The intent behind this was to unify the nation by retelling the story of America as a way to link the past to the present and our collective responsibility for shaping the future. Biden told the country, “I pledge this to you: I will be a president for all Americans . . . And I promise you I will fight as hard for those who did not support me as for those who did.”  He also led a national moment of silence to honor all the lives lost to the pandemic. Overall, his address focused heavily on faith, as opposed to religion.

Amanda Gorman, the youngest inaugural poet, captivated millions through the reading of her poem “The Hill We Climb.” Her poem, written in honor of the 46th inauguration, celebrates the country not as a “perfect union,” but as a country that has the grit to struggle with its overbearing problems. She honed in on the meaning of progress and emphasized the importance of patience in achieving the desired state of the country. Her words left a huge mark on the start of this new presidency and to many, foreshadowed a brighter future. In addition, Lady Gaga and Jennifer Lopez performed stirring renditions of the National Anthem and This Land is Your Land, while Garth Brooks wowed the crowd with Amazing Grace.

In this day and age, no serious event can go on without a laugh. The younger, social-media obsessed generation did not disappoint, churning out endless memes and edits from different parts of the inauguration. In the days and weeks that followed the inauguration, memes began flooding the internet. The most popular and viral meme was of Senator Bernie Sanders, who wore a brown coat with now-infamous mittens, crafted from repurposed wool sweaters and lined with fleece made from recycled plastic bottles. An image of Sanders simply sitting in a folding chair made its way across the internet at lightning speed. The image was photoshopped into different backgrounds and movie scenes and gave everyone quite the laugh. With gratitude to Bernie, this was the lighthearted entertainment that the whole country needed. Another non-political aspect of the inauguration was the so-called “fashion show” that took place. People on the internet were raving about how stylish members of the inauguration looked. Bright monochromatic colors were rocked by Amanda Gorman and Kamala Harris. Michelle Obama too stunned individuals in her magenta jacket with matching pants. The Biden kids as well were all over TikTok, iconically walking into the ceremony with stellar outfits.

After a tumultuous period between the election and the inauguration culminating in the attack on the Capitol, the transfer of power to a new administration thankfully took place as it has since the days of George Washington. While the number of people who witnessed the inauguration in person was small, the goals set forth in President Biden’s speech were huge.