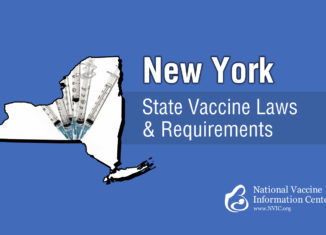 New vaccine laws have been issued in all 50 states as of the 2019-2020 school year. Under these new laws, all 50 states allow medical exemptions, while only 44 states allow religious exemptions and only 15 states are allowing philosophical exemptions. Due to the increase in Measles outbreaks, New York, along with West Virginia, California, Missouri, and Maine, have passed laws that do not allow religious exemptions for vaccines. As a result, thousands of students in New York are banned from attending public school because the religious vaccine exemptions are no longer valid. Now, all of the students that are banned from attending schools are being home-schooled or finding alternative places to learn that accept children without vaccines. To prevent schools from breaking this new law, schools are being charged a $2000 fine per child that enters the school unvaccinated. Students who are abiding by the new law had just one week after the first day of school to get their first vaccine with the intent of continuing the series within a specified time frame. Many parents have protested this issue because they feel that the state is preventing students from getting a public education that is supposed to be guaranteed to all students. Because this is the biggest measles outbreak in more than 25 years, states are not budging or changing their minds with this decision. Even though these laws can not change how people feel or their religion, impacted States feel that not letting the unvaccinated children attend school will make a safer environment for everyone. This current topic is very controversial and is definitely something that is important to have an opinion on as a member of a school community.